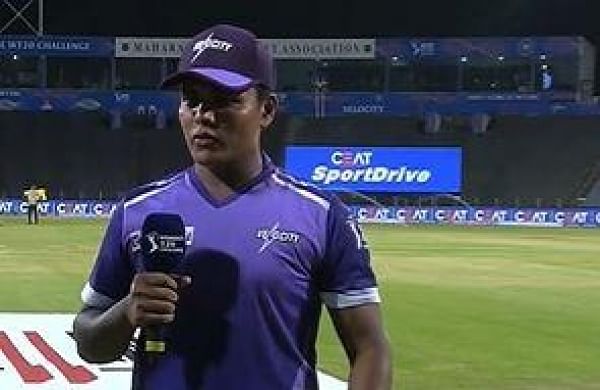 CHENNAI: When Kiran Navgire booked her ticket for the Women’s T20 Challenge, it was not just on the 525 runs she smashed for Nagaland in seven innings as a guest player in the Senior Women’s T20 League.

With none of the matches from that tournament streamed or televised, not many had seen how the Maharashtra batter did what she did. But just going by the scorecards, Kiran came into the T20 Challenge as this six-hitting specialist who took apart any bowler who came her way this season.

Comments from Velocity skipper Deepti Sharma, and England pacer Kate Cross in the lead up only added to the hype.

However, despite all that, Kiran was a bundle of nerves ahead of the first match as it was her first appearance on the big stage.

“I was a bit scared because it was my first time,” recalls Kiran from Pune.

“So, when I reached the camp, the captain and coach (Devika Palshikar) spoke with me and they made me understand that there is no pressure, no need to look at the camera, play my natural game. It gave me a lot of confidence, their positive approach and support boosted my confidence a lot.”

The fact that Velocity fielded first in their opening game and she did not get to bat helped her settle down. But as Kiran walked into bat against Trailblazers on May 26 in front of 2,422 fans at the MCA Stadium in Pune, she was in her zone.

Off the first ball she faced from Bangladesh’s Salma Khatun, Kiran got down one knee and smoked the off-spinner into the stands.

What followed over the next hour was a six-hitting exhibition as Kiran smashed 69 runs from 34 balls, helping Velocity secure a place in the final. Through the knock, she sent the ball across and over the ropes five times each, entertaining the fans.

And it had a ripple effect of sorts with 8,621 people attending the final. Although she got out for a 13-ball duck in the final, the 27-year-old had shown what she was capable of, living up to the reputation she had built over the past month and a half.

More importantly, she knows what she needs to do to get better.

“Whatever mistakes that happened there in the tournament, I am trying to work on it now,” she said.

So, what is the method behind her madness? How is she able to clear the fence with such ease and domination? For starters, Kiran believes that the early years spent on Javelin throw in state and national-level meets played a vital part in building the base for her fitness.

“It’s a game of strength and it helped me a lot to build a fitness from which I am benefiting now,” she says.

But that’s just her foundation. Every time she has had in the nets, the prime focus has always been on hitting sixes, with two-third of the session spent on honing that skill.

“Whenever I practice in nets, I don’t practice for singles and doubles. More than anything else, I practice to hit sixes. Off the three hours in nets, I practice six hitting for two hours. I ask the players, who train with me, and coaches to bowl in different lengths and try to hit sixes from there.”

And it is not just in her primitive years in cricket or with the state teams. Even as she joined the Velocity camp in Pune, Kiran treated the likes of Cross, Ayanbonga Khaka and other bowlers in her team the same way. Her skipper Deepti, Cross and Laura Wolvaardt vouched for it through the T20 Challenge.

“We did a power-hitting drill and she was hitting the biggest sixes I have ever seen. She is really powerful and it’s exciting. But not so exciting for me as a South African if I have to play against her one day when she is playing for India,” Wolvaardt said.

That is exactly what drives Kiran forward too. Aware of the fact that she started her cricketing journey late, the 27-year-old doesn’t want to miss any opportunity she gets.

A self-proclaimed MS Dhoni fanatic — whose WhatsApp status reads ‘Cricket god MSD’ — Kiran had tried to emulate everything the former Indian captain has done in his career.

From hitting sixes for fun to rocking on the backfoot to punch spinners through covers into the ground with a vertical bat, she has tried to follow the footsteps of Dhoni in every way.

“Whatever shots I play or learn, it is all related to Dhoni, because I have emulated him. I want to meet him once and talk about my game and the role that he has played in my life. He used to finish matches from wherever he came in to bat. My role is also the same. He could bring out the team from any situation and I want to be a player like that.”

Kiran has a bigger dream too. Just like her idol, she wants to lift the World Cup for India.

“Indian women have not won a world cup yet. I am moving forward, carrying that dream.”