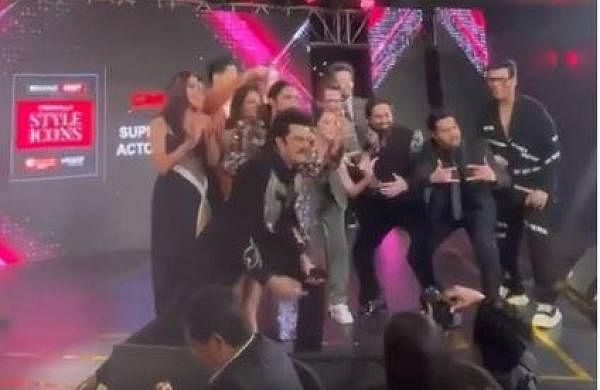 MUMBAI: It’s surely a feast for the eyes when Bollywood celebrities gather together under the same roof and leave no chance to entertain us with their presence.

On Thursday night, a slew of film stars including Ranveer Singh, Kartik Aaryan, Kriti Sanon, Anil Kapoor, Sara Ali Khan, Karan Johar, Ayushmann Khurrana, Janhvi Kapoor and Parineeti Chopra among others met each other at Pinkvilla Style Icons Awards. And guess what? They all hopped on to the ‘Nach Punjaabban’ trend.

Filmmaker Karan Johar took to Instagram and shared a fun video from the event.

“When the industry dances to #thepunjaabbansong #jugjuggjeeyo,” Karan captioned the post.

Varun too shared a video of him dancing to the song and captioned it with “All” and red heart emojis.

‘JugJugg Jeeyo’ is helmed by Raj Mehta. Varun, Kiara, Anil, Maniesh Paul, and Neetu Kapoor are a part of the film, which is all set to release on June 24.

Share
Facebook
Twitter
Pinterest
WhatsApp
Html code here! Replace this with any non empty raw html code and that's it.
Previous articleAn FIR was lodged when the car was driven on the coast of Goa, the police confiscated the car – News
Next articleBarcelona members approve sale of TV rights, merchandising
AUTO
Auto