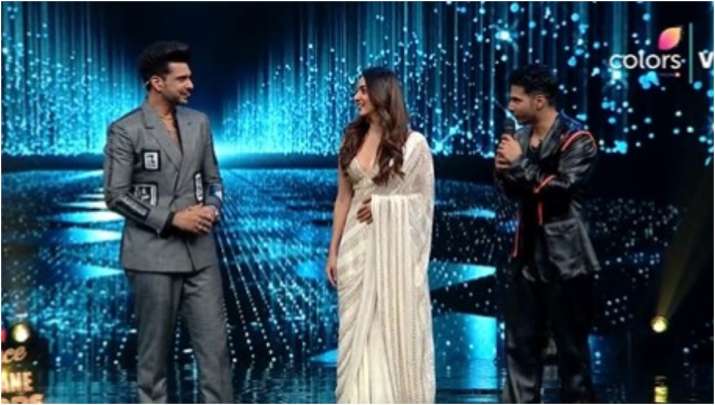 Actor Varun Dhawan is busy these days in the promotion of his film ‘Jug Jug Jio’. The actor is promoting his film fiercely with his co-star Kiara by visiting different places. Meanwhile, the starcast of the film also reached the sets of the reality show Dance Deewane Juniors.

The makers have released a promo of the show. In which the starcast of the film is seen along with the judges of the show. It can be seen in the promo that Varun Dhawan wants to know through the reality show that when Karan Kundrra and Tejashwi Prakash are getting married? Fans are also very fond of this fun between Varun and Karan.

Actually Varun Dhawan is seen saying that Karan is the best boyfriend. So in such a situation, now you have to get married. After listening to Varun, Karan starts blushing and says, I am ready, you ask Tejashwi. On listening to Karan, Varun Dhawan asks Tejashwi through TV whether he wants to live jug jug with Karan. To answer this question, Varun Dhawan told Tejashwi that she can answer it on social media as well.

Everyone will be waiting for Varun’s answer to this question. Everyone wants to see this love-story that started from Bigg Boss house come to an end. Karan and Tejasswi look very cute together and both are also captured together every day. On the other hand, if we talk about Varun Dhawan’s film, then Jug Jug Jio is going to knock at the box office on June 24.