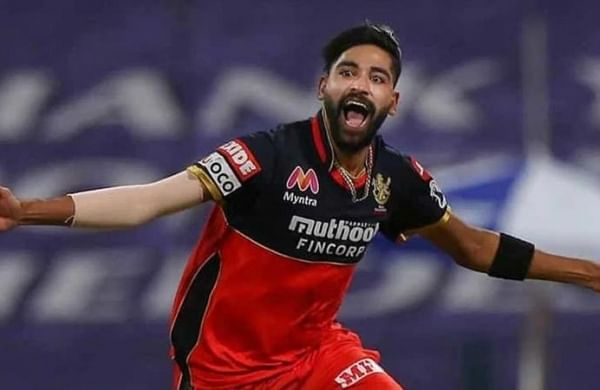 As Royal Challengers Bangalore lost to Rajasthan Royals in the second qualifier and got eliminated from the recently concluded Indian Premier League, one of their players, Mohammed Siraj, was at the receiving end of unwarranted abuse on social media with a section of fans targeting his family .

The franchise’s pacer had an off-season as he finished the campaign with nine wickets in 15 games, averaging 57.11 with an economy of 10.08. While a lot of people came in support of him on social media, this was not the first time it had happened to him. Siraj had been subjected to racial abuse from the crowd in Australia during his debut series as well.

However, having seen the ugly side of the sport early in his career, Siraj remains unperturbed by all this abuse as he prepares for the lone Test match against England in Edgbaston. “That’s what their job is, right? When we do well, they praise us and when we don’t they speak negatively,” a candid Siraj told this daily on Wednesday.

“I play the sport for my country, for my family and for the fans. All I want is to do well for the country. My father, until he was alive, was very happy about me. My mother is happy and that’s all that matters. This is why none of this stuff (abuses on social media) makes a difference to me. It happened to me early in my career and I have learned not to give too much importance to it.”

“All I can say is that every person’s life will have its ups and downs. It was a down phase for me. I can’t focus on the negativity from this phase. I should look at it positively and try to understand why it happened. Once I realise that, what my mindset was when I was doing well, I could focus on those things and how I could improve my bowling where I was lagging,” he added.

The 28-year-old’s last Test appearance came in Johannesburg during the second Test against South Africa — where he went wicketless in a match for the first time — when he injured his hamstring. As a result, he was ruled out of the series decider, and India, eventually, lost the match and the series. Having been on an upward graph since his debut in the historic Border Gavaskar Trophy victory in Australia, it was the first real low in his short Test career.

“I realized how crucial fitness was at that point and missed an important Test match. Felt really bad, a bit embarrassed too,” said the fast bowler, before adding, “but we can’t really control the injuries. You have to try to keep a positive frame of mind and work on fitness as well as bowling. When an injury happens, I just focus on what I can work on from there, how to improve my fitness, understand what went wrong and work on it. That’s all I have in my focus, to work hard to be mentally and physically fit.”

Siraj was vital to India’s 2-1 lead in the England tour last year — 14 scalps in 7 innings — before the final Test was postponed due to a Covid outbreak in the bio-bubble. With the series and some crucial points for the World Test Championship on the line, the pacer is thrilled to return to red-ball cricket.

“Really excited for the Test. But all I can do is focus on my job with the ball in hand. I would just look at the way I prepared, what worked for me and how I was bowling in that series, consistently bowling in the right areas, the right line and length. I would try and repeat the same. If I start chasing results, my mindset will be affected and that, in turn, will affect the team. I just want to focus on my bowling and try and build pressure on the opponent batters,” he signed off.