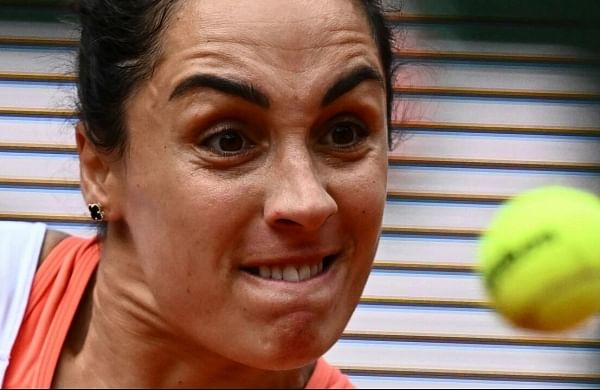 The 28-year-old will face either Coco Gauff or Sloane Stephens for a place in the final.

Trevisan was a shock quarter-finalist at Roland Garros as a qualifier in 2020.

Despite her low ranking this year, she returned to the tournament with a maiden WTA title under her belt in Rabat and went into Tuesday’s tie on a nine-match winning streak.

She made that 10 when she claimed victory on a second match point having wasted one in the second set.

“I was very nervous on that first match point, I thought I was already in the semi-final,” said Trevisan, the first Italian woman to make the last four since Sara Errani in 2013.

“That’s normal so I readjusted. I came here from Rabat with a lot of energy. It was my first title and it was a very emotional moment for me.”

Trevisan said Grand Slam titles by fellow Italians Francesca Schiavone in Paris in 2010 and Flavia Pennetta at the 2015 US Open were her influences.

“They are happy for me. I saw them yesterday as they are in Paris playing the legends event. They are my biggest inspirations.”

After being broken in the first game, US Open runner-up Fernandez needed lengthy treatment on a right foot injury after the fifth game.

At 5-4 in the second set, Trevisan was unable to convert a match point and Fernandez seized her lifeline by taking the tiebreak.

The Italian went a double break up on her teenage opponent to lead 4-0 in the decider before securing victory on a second match point with a sweeping crosscourt forehand.

Later Tuesday, 18-year-old Gauff attempts to make the semi-finals of a Grand Slam for the first time when she faces fellow American and 2018 runner-up Stephens.

Gauff, the junior champion at Roland Garros four years ago, has yet to drop a set on her way to a second successive quarter-final in Paris.

Unseeded Stephens arrived in the French capital on a five-match losing streak but has turned that dismal form around to make the last eight of a Slam for the first time in three years.

The other quarter-finals take place on Wednesday when world number one Iga Swiatek looks for a 33rd successive win when she faces Jessica Pegula of the United States.

Swiatek, who was celebrating her 21st birthday on Tuesday, was champion in Paris in 2020.

Daria Kasatkina and Veronika Kudermetova meet in the other quarter-finals, guaranteeing a Russian will make the semi-finals.