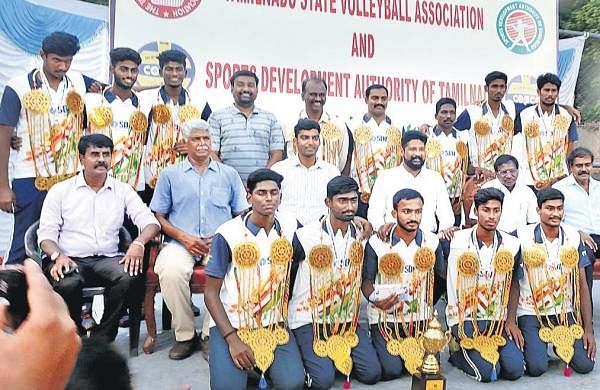 In the scorching heat of Panchkula, the Tamil Nadu U-20 men’s volleyball team made history by beating hosts Haryana in the ongoing edition of the Khelo India Youth Games. The state maintained its identity of being a volleyball powerhouse as the team upheld that reputation which has been built over three decades filled with various accolades.

“It runs in our blood. Tamil Nadu had always played with a fighting spirit. These kids worked hard and replicated exactly what Tamil Nadu Volley stood for,” said Sudhakaran, the coach of the men’s team. He expressed his happiness for their female counterparts, who had also clinched gold.

He was thankful to his players, the state association, and the government for their efforts in achieving this huge success. The captain of the team, Srinath, and a few of his mates talked about their journey to win the gold medal.

“Previously, we had our team back out due to fewer players and the pandemic. This time, we had the opportunity to play,” Srinath said.

Initially, it was difficult for them to establish coordination among the team due to lack of time. It was evident in their opening league game against eventual finalists, Haryana. “We made a lot of mistakes in the first game, and we lost. We started having team meetings with the coach and improved in the way we played,” he said

Gujarat and Haryana were tough competition for the Tamil Nadu team. “In the finals, Haryana had an incentive if they had won – a cash prize and a job opportunity. We knew that if we won, our government would also act,” he added.

The team had won the finals. On winning gold, Venu, a team member, said, “It’s a small reward for our hard work.” That is an answer you wouldn’t expect out of an 18-year-old athlete who had just won gold at the top level. Their professionalism was never in doubt.

Speaking about being a captain, Srinath explained that the players knew each other for a long time and that name was just titular in nature. “The team knows what’s at stake. We knew this would be the last time playing together and we wanted to win it,” he said.