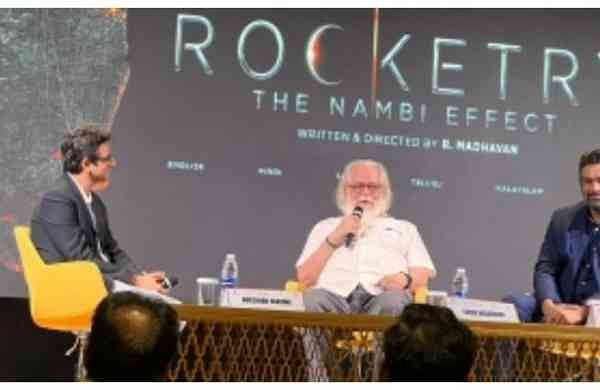 The actor-filmmaker also gave a shout-out to megastar Amitabh Bachchan and star-producer Priyanka Chopra Jonas for extending their support to his film via social media.

“Be it Suriya or (Shah Rukh) Khan sahab, none of them charge any fee for the film. They didn’t even charge anything for the caravans, costumes, and assistants. Suriya flew out to shoot in Mumbai along with his crew on his own money. He didn’t even charge for the flights or for the dialogue writer who translated his lines in Tamil.”

“There are a lot of good people in the film industry. But, I’m from outside. People have helped me a lot. Just on my request Amit ji (Amitabh Bachchan) or Priyanka Chopra post a tweet (to support the film) . I’m grateful for their love and respect towards me,” Madhavan told reporters at the press conference of the movie here.

The 51-year-old actor has also fronted, written, and produced “Rocketry”, a biopic on Nambi Narayanan, a former scientist and aerospace engineer of the Indian Space Research Organization, who was falsely accused of espionage.

Madhavan said he had discussed the idea of ​​the film with Shah Rukh when they were working on “Zero” (2018), in which he had an extended guest appearance.

“Even when I attended his birthday party, he remembered and said ‘Maddy, I want to do a role in your film. Just make me pass through the background.’ I thanked him for his kind words and he said, ‘No, no . I’m serious’,” he recalled.

Two days later, when Madhavan’s wife Sarita asked him to thank Shah Rukh for his gesture, the actor said he dropped a message to the star’s manager asking her to convey his gratitude.

“Soon, his manager called me and said, ‘Khan sahab is asking when do you want the dates?’ I said I don’t want to build castles in the air. But he was very serious. Then, I said there is no background role for him, there was an important part,” he added.

Calling “Rocketry” the “story of a superhero,” told through a commercial film, Madhavan said he hopes more films are made celebrating the success stories of scientists, engineers and IT specialists.

Last month, the film premiered at the Marche du Film section of the 2022 Cannes Film Festival in France and Madhavan said he hoped he made the country proud at an international level.

Asked whether movies based on science and technology should receive support from the government, the actor said any type of film should be promoted by the film industry itself.

Madhavan also addressed the rising popularity of the films from the south in the north and said a good movie will work irrespective of the language. “Four films such as ‘KGF’, ‘Baahubali, ‘Pushpa’, and ‘RRR’ from the south have become hits.

It’s not that all films from there have become hits. Also, it’s not like our Hindi films didn’t work at all. Films like ‘The Kashmir Files’, ‘Gangubai’, and ‘Bhool Bhulaiyaa 2’ have also worked.

“The films that have worked had crisp storytelling and every actor gave years to these projects. Getting into the character, all that hard work, the audience looks at all these things. If the film is good, it becomes a super hit, irrespective of the language,” he added.

“Rocketry”, also dubbed in Malayalam, Telugu, and Kannada, is slated to be released on July 1.