HomeTech and GadgetsRealme is launching a great Smartwatch just under Rs. 2,499 - ...

Realme is launching a great Smartwatch just under Rs. 2,499 – News

Realme Watch SZ100 India Launch Tipped: Chinese smartphone brand Realme is going to launch a new smartwatch, the Realme Watch SZ100, in India in the coming days. The launch date of this smartwatch has not been disclosed, but a lot of information related to it has been revealed. Let us know what features you can get in Realme Watch SZ100, how much it will cost and from where you will be able to buy it.

Officially, the launch date of this smartwatch has not been revealed, but according to the news, Realme Watch SZ100 can be launched in the Indian markets by the end of May this year. It will be launched in India in two colors, Lake Blue and Magic Grey. The features can be guessed through leaks. 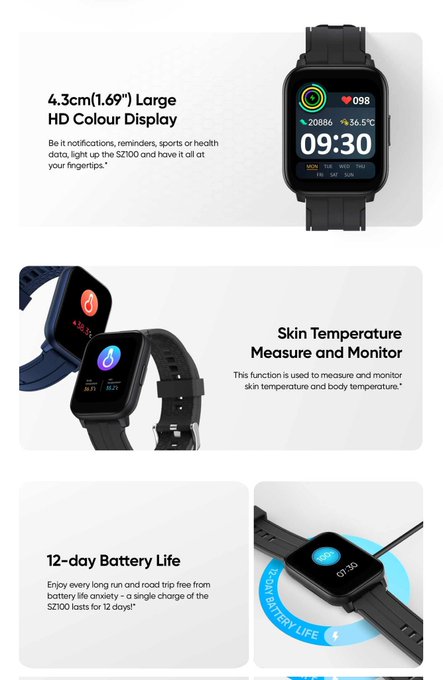 Talking about the price, Realme TechLife Watch S100 can be taken from Flipkart and Realme website for Rs 2,499. It is expected that the price of Realme Watch SZ100 can be slightly higher than this.

You have Ather 450X, so forget having DL pockets, the screen of the scooter will be stored in the system – News

Electric scooter launched at the cost of cycle, getting a discount of Rs 2,000 – News

Now Mumbaikars will also be able to travel in electric buses, BEST has placed the largest order of 2,100 buses – News

Will Hyundai Venue Electric come to compete with Nexon EV, see all the details here – News

Kia EV6 did wonders! Achieved excellent ratings in crash tests even before its launch in India – News

Booking of this new car coming to compete with Tata Punch starts in India, soon the price of Citroen C3 will be revealed –...

Redmi Note 11T Pro and 11T Pro+ launched, all the specifications and price are special – News

There is a robbery on Flipkart! Buy Redmi 5G Smartphone for just Rs 749; Offer will not be able to stop life itself –...

This air purifier will clean the air of the room in minutes, the price is only Rs 1,699 – News

Business Idea: Cultivate this medicinal plant, will earn 6 to 7 lakhs every year – News

Kapil Sharma got heavy for teasing Archana Puran Singh, got a befitting reply

‘Given the gun but never…’ What did the judge who sentenced Yasin Malik say?