HomeEntertainmentRandeep Hooda shared the poster of the film on the birth anniversary...

Randeep Hooda shared the poster of the film on the birth anniversary of Vinayak Damodar Savarkar, the actor will play the role of Veer Savarkar 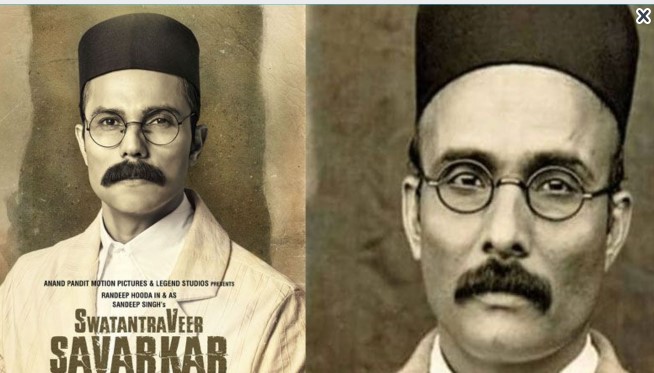 The first look of the upcoming biopic ‘Swatantra Veer Savarkar’ was released on Saturday (May 27) on the occasion of the 139th birth anniversary of Vinayak Damodar Savarkar. The film directed by Mahesh Manjrekar stars Randeep Hooda in the lead role. Talking about the film, Producer Sandeep Singh said, “At a time when Harshad Mehta, Vijay Mallya and Lalit Modi films are in trend, I am more interested in telling the life story of Veer Savarkar. He was the first dynamic hero of India and the only person who could save partition in 1947.’

He further added, ‘Through this film I want to tell the world about Savarkar’s struggle not only as a filmmaker but most importantly as an Indian. He is the most misunderstood hero and the time has come for us to understand him, and moreover celebrate a rebel like him.

Adding to what Sandeep had to say about Hooda’s casting, co-producer Anand Pandit said, “Randeep has shown his skill set as an actor time and again and moreover, has shown that he is able to do well by himself. You can change yourself in the character you play.

“I am a history buff and am excited to have the cinematic privilege to bring the story of a leader whose story deserves to be told to 70 mm,” he said.

Director Mahesh Manjrekar said, “People may have different versions in their minds for Savarkar, but as a filmmaker I am trying to match the same idea that Savarkar had. So Savarkar in the film The character will not be different in any way. Savarkar was an iconic freedom fighter and we will ensure that no Indian ever forgets him.’

Hooda said, “This is a salute to one of the tallest unsung heroes of India’s struggle for freedom and self-realization. I really hope I can meet the challenge of playing such a great revolutionary and tell his real story. This story was buried under the carpet for a long time.’

The film is going to release in August 2022.

Jacqueline Fernandez gets relief from court, gets permission to go abroad for IIFA Awards

Commenting on Samantha, said ‘the dog will die alone with the cats’, got such an answer, it stopped talking