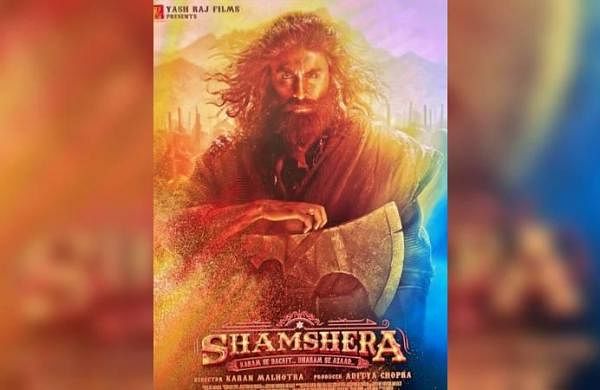 MUMBAI: The first poster of epic period film ‘Shamshera’, which will see Ranbir Kapoor returning to the big screen four years after ‘Sanju’, recently got leaked after a fan activation event.

The makers were set to kick-start the film campaign next week as activities were meticulously planned by Yash Raj Films leading up to the trailer launch.

However, all those plans seem to be dashed with the first poster getting leaked on Twitter. Fans went into a frenzy as Ranbir’s heavily guarded look drove the internet wild. Fans and audiences have given two thumbs up to Ranbir’s look as Shamshera, calling this to be one of the hottest looks sported by an actor on screen.

YRF admitted to the leak and all fingers point towards a fan activation event that was recently held with Ranbir. The production house will now have to rejig all plans due to this development.

ALSO READ | Ranbir has been well suited for all movies that I have made so far: Ayan Mukerji on ‘Brahmastra’ cast

When contacted, a YRF spokesperson confirmed to IANS saying, “Yes, we have been monitoring this situation since morning. There has been a leak and it’s quite unfortunate. Ranbir is coming back to the big screen after 4 years and we wanted to guard Ranbir’s look till people see the trailer because we were aware that it would be the biggest talking point.”

“We will now need to rejig our entire plan in the run up to the trailer launch. We should have more updates to share in the next two days”, the spokesperson added.

The story of ‘Shamshera’ is set in the fictitious city of Kaza, where a warrior tribe is imprisoned, enslaved and tortured by a ruthless authoritarian general Shudh Singh. This is the story of a man who became a slave, a slave who became a leader and then a legend for his tribe. He relentlessly fights for his tribe’s freedom and dignity. His name is ‘Shamshera’.

The high-octane, adrenaline-pumping entertainer is set in the 1800s in the heartland of India with Ranbir essaying the titular character. Sanjay Dutt plays Ranbir’s arch-enemy in this huge casting coup and his showdown with Ranbir will be something to watch out for as they will ferociously go after each other with no mercy.

Directed by Karan Malhotra, this action extravaganza has been produced by Aditya Chopra and is set to release in Hindi, Tamil and Telugu on July 22.