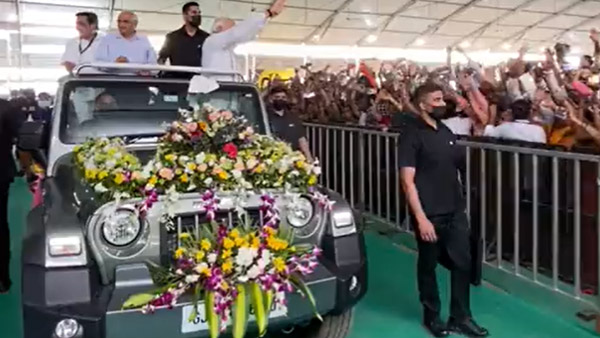 Let us tell you that Thar is considered to be a powerful SUV in India and it is available in hard top, soft top and open roof models. Looking at the pictures that surfaced, it seems that he was riding an open-roof Thar, which has a road to hold hands. This vehicle is registered in Gujarat but the information about it has not been found.

Mahindra Thar comes in two engine options – 2.0 liter petrol and 2.2 liter diesel engine. Its 2.0 liter capacity petrol engine generates power of 150 Bhp and diesel engine generates power of 130 Bhp. These engines come with 6 speed manual and automatic gearboxes. A 4×4 option is also available with both the engines. The new Mahindra Thar is more powerful, better designed and has more features than the old one.

The new Thar is now safer than before, as it has been given a 4-star safety rating by the Global NCAP. The car gets features like LED DRLs, alloy wheels, a hard rooftop, automatic climate control, forward-facing rear seats with ISOFIX mounts, and touchscreen display with Apple CarPlay and Android Auto.

The company will launch the 5-door Thar SUV between 2023-2026. With this Mahindra has talked about launching 9 new models in India by 2026. Mahindra’s upcoming new cars will be some flagship cars like New Generation Mahindra Bolero, New Generation XUV300, XUV700.

Mahindra Thar 5-door variant will offer more features than the current model and will also be more premium due to more space. However, in terms of looks and design, changes will be rarely seen in it.

This luxurious car has been seen for the first time by Prime Minister Narendra Modi. Although it is already a popular SUV, but now looking at such pictures, it seems that it can become even more popular in the coming days.