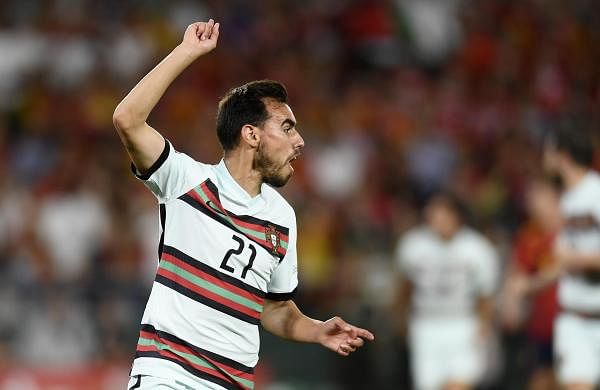 Ricardo Horta scored his first goal for his nation to help Portugal earn a 1-1 draw at Spain on Thursday.

Horta was making just his second appearance for Portugal — nearly eight years after his international debut back in 2014.

The Braga winger came on for the final minutes to join Ronaldo, who had also been on the bench and only played the final half-hour in Sevilla.

Spain’s defenders never let international soccer’s all-time top scorer become a threat, but they completely ignored Horta when he made his run into the heart of the box in the 82nd minute. João Canelo found him all alone to fire in his cross.

That canceled out lvaro Morata’s 25th-minute opener for Spain, which lost last year’s final to France.

“This feels good because Spain is a very strong team and we were playing on the road,” Portugal forward Bernardo Silva said. “This is a good result for Portugal.”

Teenager Gavi started for Spain in his hometown and helped set up the opening goal after the 17-year-old Barcelona midfielder stole a pass by Cancelo to start a counterattack. Gavi raced forward and slid a perfectly weighted pass forward for Pablo Sarabia, who squared the ball for the unmarked Morata to score.

Spain’s Carlos Soler had a chance to shoot from the top of the area four minutes later but hit it straight at goalkeeper Diogo Costa.

Rafael Leão almost leveled for Portugal in the 59th but goalkeeper Unai Simón got a foot on his shot to push it wide. Simon, however, could do little to keep out Horta’s strike.

“We failed to finish them off, but we were playing against a great team,” Morata said. “We have to keep working hard as always. There is not weak rival in this group.”

In the same group in League A, the Czech Republic beat Switzerland 2-1 at home.

Jan Kutcha put the Czechs ahead in the 11th after Switzerland failed to clear a long throw-in and Kutcha only had to tap in.

Noah Okafor pulled Switzerland back just before halftime with a powerful shot off the underside of the crossbar, but an own goal by Djibril Sow handed the Czechs the win.

Poland beat Wales 2-1 on Wednesday in the inaugural match of this third edition of the UEFA Nations League, which several teams will use as preparation for the World Cup in November.

Erling Haaland helped Norway get off to a good start in League B. The striker, who is set to join Manchester City, scored in the 26th from a pass by Marcus Pedersen to down the Serbs in Belgrade.

Sweden also won 2-0 at Slovenia in the same group.

In a different group in League B, Shon Weissman’s 84th-minute goal earned Israel a 2-2 draw at home against Iceland.

Greece got a first-half goal from Tasos Bakasetas to win 1-0 at Northern Ireland in Group 2 of League C.

Georgia routed Gibraltar 4-0 while Bulgaria was held 1-1 at home by North Macedonia in Group 4 of League C.

Share
Facebook
Twitter
Pinterest
WhatsApp
Html code here! Replace this with any non empty raw html code and that's it.
Previous articleAt the age of 50, this lady doctor reduced the weight of 11Kg, used to take lentils and bread in lunch and such a diet in dinner
Next articleiPhone 13 prices reduced before the launch of iPhone 14! Your senses will be blown away knowing the new price – News
AUTO
Auto