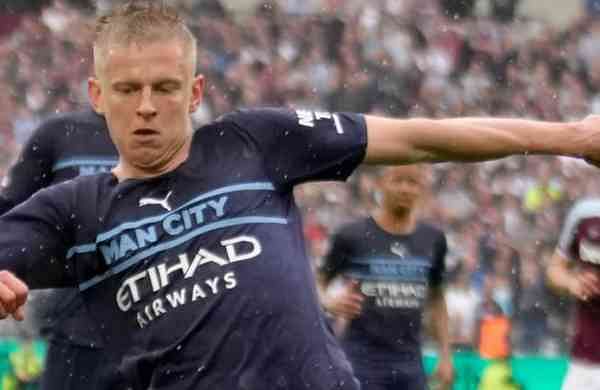 As Zinchenko paraded around the field with the trophy, the yellow-and-blue colors of his homeland were wrapped around him. Then the weeping Ukraine international set the trophy down on the field and draped it in the flag — sending out another powerful message in support of his nation as it fights back against the Russian invasion.

“It’s unforgettable emotions for me, for all the Ukrainians who at the moment are starving,” Zinchenko said after Sunday’s 3-2 win over Aston Villa sealed the title. “They are surviving in my country because of Russian aggression. I’m so proud to be Ukrainian, and I would love to one day bring this title to Ukraine, for all Ukrainian people, because they deserve it.”

More than 6 million people have fled Ukraine since the start of the war on Feb. 24, according to the United Nations refugee agency. Zinchenko has raised money for the refugees and used social media to highlight Russian atrocities.

“At some point, especially in the beginning, I didn’t think too much about football because it is impossible to live with what is happening in my country,” Zinchenko said. “But with all the support which I had during this period, we did it.”

Zinchenko played a pivotal role on the field in securing the victory over Villa that ensured the team held off Liverpool’s challenge by one point, giving him and City a fourth title in five seasons.

The left back came on at halftime to replace the struggling 37-year-old captain Fernandinho when his team was trailing 1-0 and he set up Rodri for the goal that tied the season finale at 2-2 before Ilkay Gündogan grabbed City’s third goal in a five-minute spell.

Buoyed by the support of his nation and City fans, Zinchenko’s mission after the Premier League title celebrations is trying to qualify Ukraine for the World Cup.

“I want to die for these people, for all this support,” he said, “because what people gave me, what they have done for me during all this period, the toughest period of my life, I am so appreciative and I will never forget this. Never in my life.”

The climax to World Cup qualifying for Ukraine was delayed by the start of the war. Ukraine plays Scotland in the semifinal playoffs on June 1 with the winner facing Wales in Cardiff on June 5 for Europe’s final place in Qatar.