HomeSportsMother of all rows as Rune, Ruud trade 'grow up', 'no respect'...

Mother of all rows as Rune, Ruud trade ‘grow up’, ‘no respect’ barbs 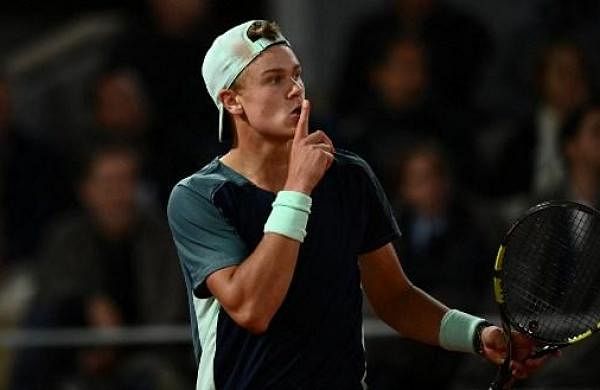 COPENHAGEN: Holger Rune was told to “grow up” by Casper Ruud while the Norwegian was advised to “show some respect” after the two fought out a tense French Open quarter-final in which the Danish teenager even appeared to order his own mother to leave the stadium.

Rune took out his frustrations on the court, repeatedly grimacing and shouting at himself and the umpire as tensions mounted between the two players.

At one point, Rune yelled “leave, leave, leave” at the player’s box, after which his mother Aneke slipped out.

Following the match, the 19-year-old Dane said Ruud was “so unsportsmanlike during the match and talked to me over and over again”.

“I didn’t want to give him a hug after the match. He got a high-five and then I just had to get away from him”, Rune told Danish daily Ekstra Bladet, as images showed Ruud shaking his head at the net .

Rune said Ruud then taunted him in the locker room after the match.

“He just went straight up to me and shouted “YEEEESSSS” right up in my face” Rune said.

“You can cheer on the court all you want and be happy. I do that myself when I win. But that’s such bad style. Have some respect”, he added.

And Ruud himself criticized Rune’s behavior on the court and said he needed to “grow up”.

“I don’t know Holger personally, but I have seen on TV that sometimes there can be a lot of drama. He’s young and new, so that’s excusable, but when you’re on a big stage, it might be time to grow up a bit”, the 23-year-old Ruud told Norwegian daily VG.

Rune, who had knocked out world number four Stefanos Tsitsipas in the fourth round to become the first Danish man to reach the last-eight in Paris, appeared to address the criticism in an Instagram post on Thursday.

“I put a lot of passion in my work because that’s how I am. I am proud of my development and I also see there are things yet to be better.”

In the quarter-final “I didn’t find my level and it’s frustrating. Still, I should be able to find a way to win and this requires more emotional control. I am aware of this and will improve.”

Ruud will meet 2014 US Open champion Marin Cilic for a place in Sunday’s final.

Share
Facebook
Twitter
Pinterest
WhatsApp
Html code here! Replace this with any non empty raw html code and that's it.
Previous articlemorning or night? What is the right time to take bath, expert told what is the rule in Ayurveda
Next articleHDFC makes home loan costlier by 40 basis points in a month, know how much EMI will increase – News
AUTO
Auto