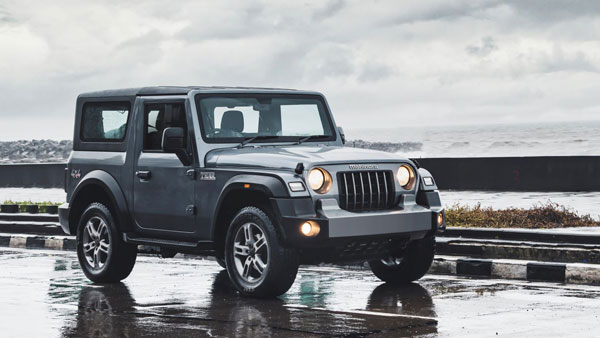 Mahindra Thar has around 40,000 – 50,000 orders pending and the company is not able to fulfill it. In such a situation, Mahindra decided to cut down on the equipment as there is also a shortage of equipment. Along with this, there has been an increase in the cost of raw material and the cost of transportation, so the company has taken this step to keep the price low.

First of all, talking about the features update, the company has removed its black bumper. Earlier, silver shade was available on the front and rear bumpers but now there is no paint on the entire bumper, front and rear. In such a situation, it not only reduces the cost of Mahindra, but it also saves production time and manpower.

At the time of launch, the company had given Caesar all-terrain tires of Ceat in it and after that the company had given AT tires of MRF. Now again, the new models are being given Seat Crossdrive AT tires. Along with this, some changes have been made in the interior. Where two USB chargers were available in front of it earlier, but now only one charger is available.

At the same time, the lumbar support adjusting knob has been given in the front seat, this too has now been removed. However, these are not some big features that will spoil the experience of this powerful SUV. Still, this SUV has been given a lot of features and safety equipment which makes it better than the competitors.

The new Thar has been brought in two trims AX and LX. The LX variant is for general use while the VX variant is specially designed for adventure and off-road riding. Roof options include soft top, convertible top, and hard top/fixed top. It is available in both petrol and diesel engine options.

Talking about the interiors of Thar, it gets a new roof mounted speaker, new touchscreen infotainment system, which shows real-time status on-road and off-road. Along with this, fixed soft top, dual airbags, ABS and rear parking assist have been given as standard.

The off-road SUV has a ground clearance of 226 mm and a water wading capacity of 650 mm. It is available in 6 seater option. Along with this, for the first time, front facing rear seat and factory fitted hardtop have been given. It has become the country’s cheapest SUV with four wheel drive system. This system can be placed in 2 High, 4 High and 4 Low.

Mahindra Thar is a popular SUV across the country but due to delay in delivery, people are hesitant to buy, so the company is cutting down on features and equipment. Now it has to be seen how long the company can clear the pending orders.