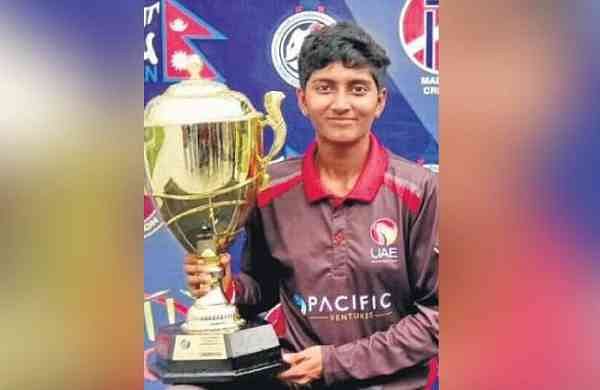 CHENNAI: As skipper Theertha Sathish took a single off Thailand’s Sunida Chaturongrattana in the first ball of the 18th over, helping UAE U-19 get across the line in their final game of the ICC U-19 Women’s T20 World Cup Asia Qualifiers on Thursday, The entire Kinrara Academy Oval in Kuala Lumpur was filled with emotions. There were tears not just in the dressing room but also among the parents who had traveled from the United Arab Emirates to watch their kids play. After all, they had just sealed their place in the inaugural edition of the U-19 World Cup in South Africa early next year.

“It was the deciding match with both teams winning four matches each. From the outside, we were very stressed. We could feel how the team would have felt. Once the match got over, everybody was in tears. That feeling can’t be expressed in words. It was an absolute team effort,” said Theertha’s mother, Rathna Sathish, an architect in Dubai.

Theertha, the left-handed wicketkeeper-batter, was born in Chennai and grew up in India until she was five. Growing up, she was into various sports, recalls her father, Sathish Selvanambi, a finance professional. Through her early years, she took part in several sports, including cricket, at the age-group level for her school — GEMS Modern Academy in Dubai — where the UAE women cricketers used to train.

In 2018, she performed well in an inter-school tournament which grabbed the attention of a UAE coach who asked if she would be interested in joining the U-19 development squad that was about to be formed.

“I wasn’t sure at that point,” Theertha told this daily. But the turning point came when she watched the Tamil movie Kanaa — which speaks about the journey of a young girl, Kousalya Krishnamurthy, from a remote village who dreams of winning the World Cup for India.

“Generally, I get emotional during movies. It was especially about women’s cricket. It was a humble movie, and it affected me. I thought, why not give it a try, and here I am,” laughs the 18-year-old, who is currently with the UAE senior team in Malaysia for the Asia Cup Qualifiers.

“She was into all sports growing up — athletics, basketball, football. She even got selected for a U-17 football camp in India. It was at that time, that she was transitioning into cricket. She saw Kanaa, and she felt that the girl in the movie, in a predominantly male-dominated sport, had that passion and came up in spite of all the constraints. She is basically a Tamilian at heart, and somehow, it struck a chord with her,” said Sathish.

From thereon, her cricket career was on a fast track as she made her senior team debut in 2021, at 17, against Malaysia in the ICC Women’s T20 World Cup Asia Regional Qualifiers and scored a 48-ball 46.

“During that time, she had her class XII first semester exams as well. She used to play in the morning. We would drive her to school and then drop her back at the hotel for the next day’s match. She performed well, finishing as the top-scorer in the tournament (165 runs in 5 innings). That gave her a lot of confidence to compete at the top level,” said Sathish, appreciating the support of the Emirates Cricket Board and the team’s support staff.

In May 2022, Theertha was a part of the Falcons side that finished second in the FairBreak International — an ICC-sanctioned private T20 tournament. Sharing the dressing room with international stars like Suzie Bates, Marizanne Kapp, and Danielle Wyatt was a massive learning curve for her.

“In the final against Tornadoes, we were in a similar situation after losing early wickets (like the World Cup qualifiers match against Thailand). I couldn’t finish off the innings well on that day. But in the match against Thailand, I used that experience and did well. I also spoke to Suzie about captaincy with my coaches. She gave a lot of tips, and that helped a lot. Not just me, many of the UAE players were net bowlers in the tournament. It helped the team as well,” said the southpaw.

Theertha finished the ICC U-19 Women’s T20 World Cup Asia Qualifiers as the leading run-getter, with 175 runs in five innings. Captaining a side for the first time, for the opener, batting became something she just wanted to enjoy. “It felt like meditation when I was batting in the middle. Just wanted to see the ball and hit it and have fun,” said the wicketkeeper-batter.

A big fan of former India men’s captain MS Dhoni, Jemimah Rodrigues and South Africa all-rounder Kapp, Theertha likes to stay in the present. The UAE has a packed calendar ahead, with both the senior and U-19 sides, and Theertha might have the opportunity to lead the latter in the inaugural edition of the U-19 World Cup next year. But not looking too far ahead, she wants to stick to her strengths, take one game at a time and play the best cricket possible.

In the movie Kanaa, Kousalya was a rookie who grabbed the opportunity to shine for India in the World Cup. At 18, Theertha — who took to cricket seriously inspired by that movie — along with her teammates helped UAE get to the global event. And going by her performances so far, this could just be the first of many dreams she is set to conquer.