HomeSportsLiverpool beats Villa 2-1, level on points with City in EPL

Liverpool beats Villa 2-1, level on points with City in EPL 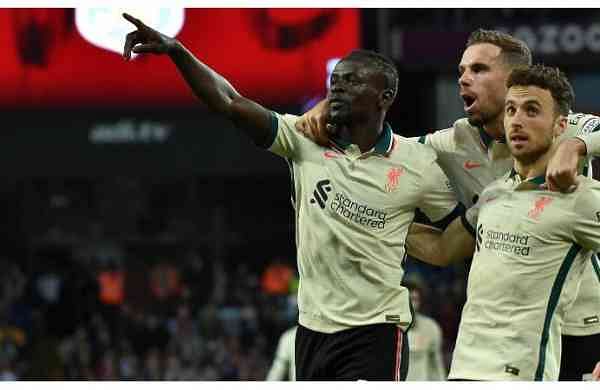 BIRMINGHAM: Liverpool has ensured the Premier League’s thrilling title race will stretch into the final week of the season.

A come-from-behind 2-1 win at Aston Villa, sealed by a 65th-minute header by Sadio Mane, showed Liverpool’s heart for the fight and moved Jürgen Klopp’s team level on points with Manchester City on Tuesday.

City still leads thanks to its superior goal difference of 3 to Liverpool.

The defending champions play their game in hand against Wolverhampton on Wednesday, after which the two title rivals will have only two more league games to play.

The earliest City could now clinch the league is on Tuesday, when Liverpool plays its next league game at Southampton. Before that, City plays twice, against Wolves and then West Ham on Sunday.

“We cannot do more than win,” Klopp said.

“A lot of people thought this could be a banana skin, that it could be a struggle for us, and how the boys sorted that was absolutely outstanding.”

The Reds, who drew 1-1 with Tottenham on Saturday, avoided having their title bid further derailed by a Villa team managed by one of their greatest players.

Steven Gerrard, a boyhood Liverpool fan and former star midfielder, insisted his focus was purely on winning the game for Villa and saw midfielder Douglas Luiz, who was once on Man City’s books, give his team the lead in the third minute.

The Brazilian forced the ball into from close range after his initial header was only parried out by Liverpool goalkeeper Alisson Becker.

Villa held the lead for less than three minutes, with Joel Matip equalizing by converting into an unguarded empty net after fellow center back Virgil van Dijk had a shot saved by goalkeeper Emi Martinez.

Liverpool lost Fabinho in the 30th minute to a hamstring injury that could potentially rule the holding midfielder out of the FA Cup final against Chelsea on Saturday.

Fabinho had been struggling up to that point he was lucky to avoid getting a yellow card for repeated fouls and his replacement, Henderson, used his experience to calm the game down.

Liverpool had regained control by the time Mane twisted his neck to meet a cross from the left from Luis Diaz with a header into the bottom corner.

Now playing more as a central striker following Diaz’s arrival, Mane has become a pivotal player in recent months for Klopp, who gave the Senegal international a big hug after the full-time whistle that came as Liverpool’s away contingent sang the club’s anthem, You’ ll Never Walk Alone.

“He’s a machine. A massive player,” Klopp said of Mane. When everyone has yards in their legs, you can’t see it with him.

Ahead of the FA Cup final at Wembley Stadium, Klopp chose to leave out left back Andrew Robertson from the squad entirely and begin with Mohamed Salah and Thiago Alcantara on the bench.

Liverpool finishes the league campaign with games against Southampton and Wolverhampton next week.

As for City, Pep Guardiola’s team might need to claim seven points from its remaining three games to win the sixth title in 11 years.

The last match is against Villa on the final day of the season, so Gerrard can still have a massive say in the title race but now by helping his old club.

“In terms of commitment, heart and application, the lads gave me all I could ask for,” Gerrard said.

“Against one of the top sides in the league, we’ve been done in moments.”

Share
Facebook
Twitter
Pinterest
WhatsApp
Html code here! Replace this with any non empty raw html code and that's it.
Previous articleThis electric scooter is cheaper than ₹ 60000, gives a great range of up to 85 KM, will travel up to 1 KM in 65 paise – News
Next articleTata Nexon EV ‘Max’ launched, will get a range of 437 km, know what is the price and features – News
AUTO
Auto