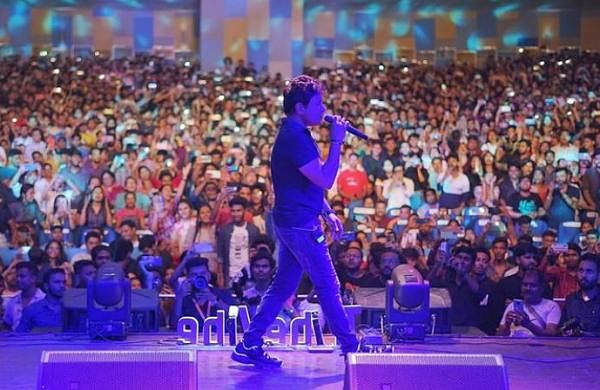 Kolkata: Minutes after Krishnakumar Kunnath (53), popularly known as KK, performed 20 songs in a row in front of a 7,000-strong audience at Nazrul Mancha auditorium in south Kolkata, the Bollywood playback singer was feeling cold and asked to switch off the air-conditioner of his car while returning hotel where he collapsed.

“He of feeling uneasiness even during the stage performance. He told about the glare of the lights. After boarding his car, he told his secretary Hitesh Bhatt that he was feeling cold. He asked to turn off the air conditioner of the car. In the lobby of the hotel, a few fans of the singer were waiting to take selfies. But KK politely refused saying he was not feeling well,” said event organizer Tochan Ghosh.

Bhatt said KK retired to his room from the lobby. “Shortly after opening the door, he was about to sit on a sofa but collapsed on the floor. He was taken to a private hospital in Ekbalpore where doctors pronounced him dead,” he said.

Kolkata police registered an unnatural death case to conduct a probe into KK’s death since the singer was pronounced at the private hospital. “Bruises were found on KK’s forehead and lips. We are probing whether it is because of collapsing on the floor of the hotel,” said a police officer.

The singer’s body was kept in the mortuary of the private hospital from where it was brought to the state-run SSKM Hospital for an autopsy to ascertain whether it was a case of a heart attack.

Chief Minister Mamata Banerjee expressed her grief over the sudden demise of the singer. “It is an untimely loss. I talked to the singer’s wife. I am in coordination with my ministers in Kolkata. If the weather allows, I will fly to Kolkata airport to pay my last respect to the singer. Police will also give gun salute ,” she said while addressing a rally in Bankura district on Wednesday morning.

The singer’s body will be taken to Mumbai.

Anjita Rudra was one of those who was in the packed auditorium on Tuesday night. “I am his big fan. It was a mesmerizing performance. I couldn’t believe my hero singer is no more when I was mesmerized by his performance a few hours ago,” she said with tears rolling down her face.

KK had come to Kolkata on Sunday for two performances in the state capital. Both the performances were staged at Nazrul Mancha. Tuesday’s performance was the annual social of Gurudas Mahavidyalaya in Ultadanga.

According to police, the auditorium was stashed more audience than its capacity. “There was an audience of 7,000 odd people and the auditorium has a capacity of around 2,500 people. The auditorium authorities had to open five gates out of seven after thousands of students of turned up there,” said another police officer.

Share
Facebook
Twitter
Pinterest
WhatsApp
Html code here! Replace this with any non empty raw html code and that's it.
Previous articleKia EV6 will run 500 km on a single charge, price leaked ahead of launch – News
Next articleYoutube: As many as 11 lakh Indian videos have been deleted from YouTube platform, because it is – News
AUTO
Auto