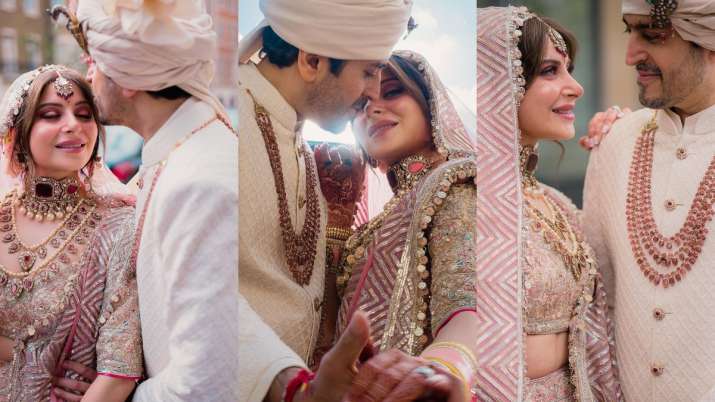 Kanika Kapoor Wedding: popular singer of bollywood Kanika Kapoor On May 20, she tied the knot with London-based businessman ‘Gautam Hathiramani’. Now Kanika’s wedding pictures are going viral on social media. In these wedding pictures, Kanika is seen wearing a pastel colored lehenga while Gautam is wearing a pastel colored sherwani. For her special day, the ‘Baby Doll’ fame looked stunning in a pastel pink heavy embroidered lehenga with choker necklace, maangtika and bangles.

Earlier, Kanika shared pictures of her Mehndi Ceremony on her Instagram profile. She was wearing a mint green lehenga, which was decorated with flowers. He had given the caption in this picture, “Ji, I love you so much”.

During the Haldi ceremony, Gautam was seen in white traditional attire and Kanika looked gorgeous in her silver lehenga. At the same time, a video of the wedding has also gone viral on social media in which Kanika can be seen walking down the aisle under a sheet of flowers.

Let me tell you, Kanika was earlier married to Raj Chandok. Kanika has three children from her first marriage, Ayana, Samara and Yuvraaj. They separated in 2012. According to reports, Kanika and Gautam were dating each other for almost a year, after which they decided to get married.

Vimi had once made films with big stars, at the last moment no one gave, the corpse reached the crematorium on the handcart

Share
Facebook
Twitter
Pinterest
WhatsApp
Html code here! Replace this with any non empty raw html code and that's it.
Previous articleThis fan runs even without electricity, in a few minutes it will make it cooler than a cooler, know how much is the price – News
Next articleChildren With Tomato Flu-Like Symptoms Visiting Capital Hospital, Nothing To Be Scared Of, Says Director | Odisha
AUTO
Auto