HomeTech and GadgetsKangana Ranaut bought this luxurious sedan from Mercedes-Benz, the price will blow...

Kangana Ranaut bought this luxurious sedan from Mercedes-Benz, the price will blow my senses – News 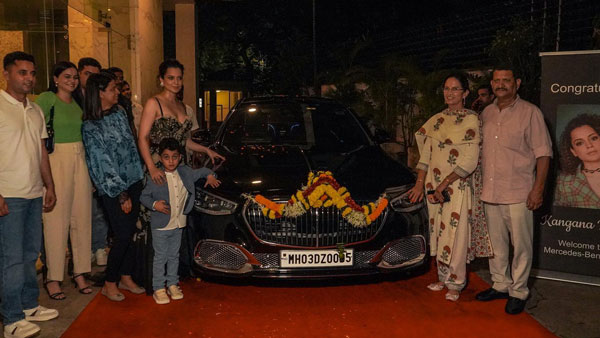 Let us tell you that Kangana Ranaut’s new film Dhaakad is going to be released in theaters later this week, but before its release, she has bought this luxury sedan. The Mercedes-Maybach S-Class has been introduced in India in two variants – S 580 and S 680 4MATIC.

Kangana Ranaut has actually bought the top-spec S 680 4MATIC variant, which is priced at ₹3.2 crore (ex-showroom, India). This model is sold in India as a Completely Built Unit (CBU) unlike the locally assembled S580 in India.

The Mercedes Maybach S-Class is the most premium sedan in the company’s S-Class lineup. It is offered with more legroom, comfort and premium features. The company has also given Level-2 autonomous driving function along with Lane Assist feature.

The car also gets Burmeister high-end 4D surround sound system. To keep the cabin quiet, it gets airmatic air suspension with adjustable damping ADS+, which adjusts the powertrain, ESP, suspension and steering via dynamic select.

Apart from this, there is also a Maybach driving mode in the car, which is completely focused on ride comfort. The company has given five display screens with MBUX infotainment system in Maybach S-Class. The car gets a chauffeur package with executive seats on the left and right sides, which allows the buyer to independently adjust the seat surface and backrest.

The upholstery is upholstered in exclusive Nappa leather, with a high pile floor mat and a Dinamica roof liner. While the steering wheel gets a wooden and Nappa leather finish. Many gesture controls are also available in the car with the help of high precision laser cameras.

In terms of design, the Maybach S-Class gets a large chrome grille up front, LED headlight, integrated DRLs and chrome finishing on the bumpers. Chrome lining has been used on the windows and ORVMs to enhance the premium look of the car. It has 19-inch alloy wheels.

Coming to the engine, the new Maybach S-Class S580 will be powered by a 4.0-litre V8 twin-turbocharged engine that is mated to 48V mild hybrid technology. Together, both the powertrains give the car 496 Bhp of power and 700 Nm of peak torque. It is mated to a 9-speed automatic gearbox that sends power to all four wheels of the car.