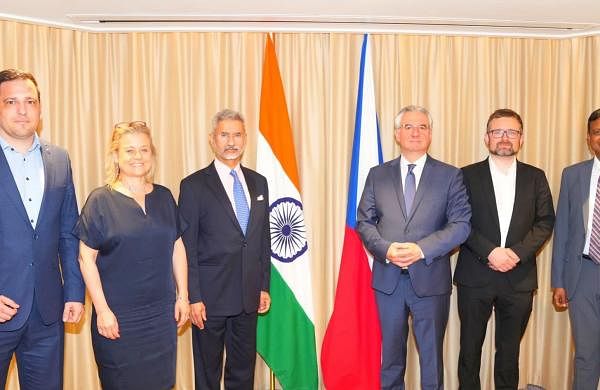 PRAGUE: External Affairs Minister S Jaishankar on Sunday held a meeting with a delegation of Czech Members of European Parliament and they had a “good discussion” on India’s ties with the EU and the Czech Republic, the Indo-Pacific, food and energy security and digital cooperation.

Jaishankar is here on the last leg of his two-nation tour to Slovakia and the Czech Republic to impart further momentum in ties with the two central European countries.

The Czech Republic will be taking over the European Union presidency from July 1.

He arrived in Prague on Saturday from the Slovakian capital Bratislava.

“Began my engagements in Prague by meeting a delegation of Czech MEPs. A good discussion on India’s ties with EU and the Czech Republic, the Indo-Pacific, food and energy security and digital cooperation,” Jaishankar said on Twitter.

India, the US and several other world powers have been talking about the need to ensure a free, open and thriving Indo-Pacific in the backdrop of China’s aggressive military manoeuvring in the region.

China also claims nearly all of the disputed South China Sea, though Taiwan, the Philippines, Brunei, Malaysia and Vietnam all claim parts of it.

Beijing has built artificial islands and military installations in the South China Sea.

Jaishankar, after his meeting with the delegation of Czech MEPs, thanked them for taking time out on a Sunday.

The External Affairs Minister’s visit comes at a time Europe is grappling with the implications of the Russian invasion of Ukraine.

The issue is likely to figure in his talks in the Czech Republic.

During his visit to the Czech Republic from June 4 to 6, Jaishankar will hold discussions with Foreign Minister Jan Lipavsky.

“The discussions will provide an opportunity for a comprehensive review of our bilateral cooperation,” the Ministry of External Affairs had said in a statement ahead of his departure.

In addition to meeting the political leadership of the country, Jaishankar will also interact with a cross-section of the Indian diaspora, including Indian students in the Czech Republic.

“India has traditionally enjoyed close and friendly ties with both Slovakia and the Czech Republic. The external affairs minister’s visit will impart further momentum to bilateral relations with the two Central European countries,” the MEA had said.

Share
Facebook
Twitter
Pinterest
WhatsApp
Html code here! Replace this with any non empty raw html code and that's it.
Previous articleFortnite back after being down for hours
Next articleIf No. 1 Iga Swiatek keeps improving, look out
AUTO
Auto