HomeSportsIt was really nice to see Karthik come off and do what...

It was really nice to see Karthik come off and do what he has been picked to do: Rahul Dravid 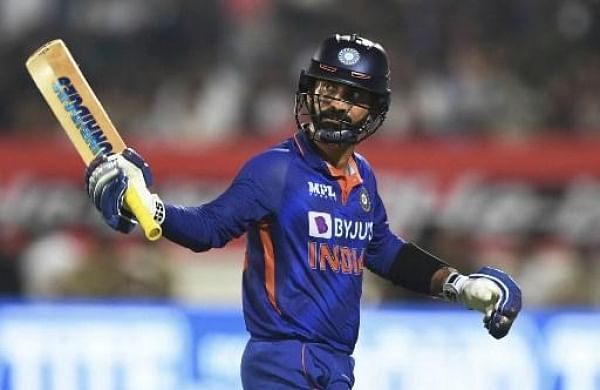 BENGALURU: Dinesh Karthik as an “enforcer” opens up a lot of options going into the T20 World Cup, says India head coach Rahul Dravid, who wants to identify a core group of 18-20 players by the end of England series.

For Dravid, to be a part of the World T20 set-up, it won’t be enough to just “knock the door”. Anyone who wants to stake a claim in that squad of 15 will need to “bang it down”.

“It was really nice to see Karthik come off and do what he has been picked to do. That was good and it opens up a lot more options for us, going forward,” Dravid said after the five-match series against South Africa ended in a 2-2 draw. The last game was abandoned due to rain.

“He was picked for what he has been doing exceptionally well for the last two or three years (in IPL) and kind of indicated in the sense that it almost came together in the game at Rajkot,” Dravid spoke about the Tamil Nadu dasher’s 27 -ball-55 that was crucial in India restoring parity in the series.

For Dravid, Karthik and Hardik Pandya are the two ‘enforcers’ in the death overs.

“We needed that big performance in last five overs to make a par score and he and Hardik batted beautifully. Both of them are enforcers for us at the end,” Dravid spelt out what role the team management has in mind for Karthik.

The coach had no hesitation in admitting that Karthik has made a good case for himself going into the T20 World Cup.

“Want to get hang of core as quickly as possible. Dravid doesn’t want to put a timeline but by the end of the England T20Is, he wants to have a fair idea about the 18 to 20-odd players he would be looking at ahead of World Cup in Australia. India and England will clash in six white-ball games (July 7-17) after one-off Test.”

“As you come closer and closer to the event, you want to firm up your final squad or if not, obviously you want to have some contingencies in the kind of world we live in today. Obviously you want to take only 15 to the WC but (need to identify) top 18 to 20 players,” he replied to a query on where he stands on his core team.

“Obviously, there could be odd changes due to injury and things that are beyond your control but we are going to start looking to firm up that squad as quickly as possible.

“Whether that will happen in the next series (Ireland) or series after that (England) is hard to tell but we are certainly looking to do that as quickly as possible,” he revealed.

Coach defends under-fire Gaikwad and Iyer. If there were two people who have ideally blown away their chances to be a part of World T20 core squad, they are Ruturaj Gaikwad (96 runs in 5 games) and Shreyas Iyer (94 runs in 5 games).

Gaikwad is looking completely out of place in international cricket and Iyer’s struggle against quality pace bowling is now well-documented. The head coach however chose to be a bit more empathetic towards the duo even though one will not play against Ireland (Iyer is in Test team) and other unlikely to get any more starts.

“We are not going to make knee-jerk reactions on people just like that. I don’t like judging people after one series or one game,” Dravid said.

“Shreyas on a couple of tricky wickets showed a lot of intent, played really positively for us. Ruturaj in one innings showed what he has got. We are not disappointed with anyone,” Dravid once again showed the dogged defense of his playing days.

“As a group, we wanted to play a certain brand of cricket and we were trying to play a slightly more positive and attacking brand of cricket right from the beginning and we knew when you try and do that, it is not always going to come off But we are certainly clear about the kind of cricket we want to play,” he said.

Even Big Bash stats needs to be looked at before World T20 Dravid is known to rely a lot on data analysis and he would love to gather information on playing conditions and oppositions before the tournament-proper.

“Lot of our boys have played in Australia and we certainly will be having conversations with them on what kind of tactics and strategies work,” he said.

ALSO READ | ‘I am feeling very secure in this set-up’: Karthik after maiden T20I fifty

“In terms of data and analysis, we will look at all games being played in Australia and obviously they are international games, there is Big Bash and I mean we will do all our research and background things that happens in terms of analysis.

“And of course, we don’t have a series against them (Australia in Australia), so we can’t change that. I guess we have to make do with two weeks we have in the lead up to the World Cup and make best use of it.”

This will be a different England Test side Rahul Dravid loved playing Test cricket in England and loves coaching a Test team.

He reckons that the one-off ‘fifth Test’ against the hosts will be a different proposition from last year when the team under Virat Kohli led 2-1 before Covid-19 cases in India camp forced the cancellation of the final game.

“England are playing well at the moment and it is going to be a bit different from last year when England were probably a little bit on the backfoot. They have played some good games and we have a pretty good side as well,” Dravid said , referring to Ben Stokes’ side’s series win against New Zealand.

“Loved playing Test cricket, love watching it and love coaching in Test cricket and so you know, looking forward to it,” he concluded.

Share
Facebook
Twitter
Pinterest
WhatsApp
Html code here! Replace this with any non empty raw html code and that's it.
Previous articleEmotional post of KK’s daughter on Father’s Day, wrote- I will bear the pain of losing you 100 times if…
Next articleRussia becomes biggest supplier of oil to China News
AUTO
Auto