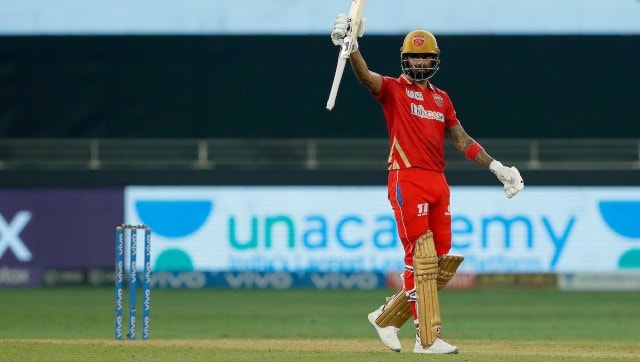 Check out some of the best photos from Punjab Kings’ five wicket win over the Kolkata Knight Riders in match 45 of IPL 2021.

KL Rahul led the Punjab Kings to a five-wicket win over the Kolkata Knight Riders, scoring 67 runs in the process. SportzPics Arshdeep Singh was one of the major threats with the ball during Kolkata Knight Riders’ innings, and it was him who took the very first wicket of Shubman Gill in just the third over. He later went on to add a couple more wickets to his tally. SportzPics Venkatesh Iyer then played a composed and free-scoring knock of 67, which also included an impressive 72-run partnership with Rahul Tripathi, which looked like it could power KKR to a massive total. SportzPics Luckily for Punjab, spinner Ravi Bishnoi continued his excellent run of form by picking up the wicket of Iyer, after which KKR seemed to crumble a little, only managing to put up a fairly mediocre total of 165/7. Sportzpics KL Rahul and Mayank Agarwal began excellently, putting together a partnership of 70 runs, before Varun Chakaravarthy struck to remove Agarwal. Rahul persevered however, and even though Chakravarthy would eventually get another wicket, Rahul played on all the way until the final over, where he would eventually be dismissed by Venkatesh Iyer. SportzPics Rahul’s wicket came far too late though, and Shahrukh Khan ably guided Punjab Kings to victory with a six. SportzPics