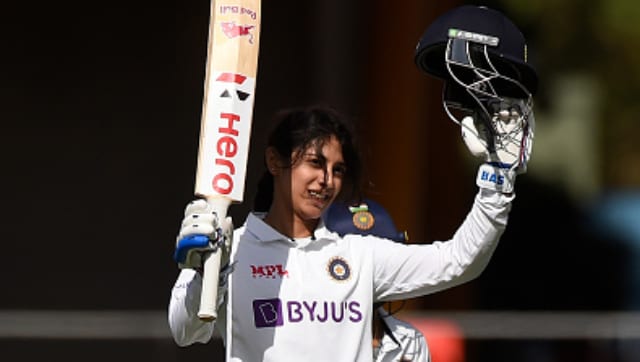 Smriti Mandhana stamped her class at Gold Coast’s Metricon Stadium on Friday as she hit her maiden hundred in the Test format in the ongoing day-night Test between Australia and India.

Left-handed Indian opener Mandhana, who was unbeaten on 80 after rain washed out a majority of the opening day of the match, reached the milestone with a boundary off Ellyse Perry in the afternoon session on the second day, taking 170 deliveries to get to the milestone. It was only the 13th instance of an Indian bringing up the three-figure mark in women’s Tests.

The Sangli native has played a key role so far in the Indians dominating the Test — their first pink-ball match — so far as she attacked the Aussie seamers from the very outset after Meg Lanning opted to field on Day 1. She cracked 22 fours along with a six off Tahlia McGrath before getting dismissed by Ashleigh Gardner to depart for 127 — the seventh-highest score by an Indian in women’s Tests.

Let us take a look at some of the reactions to Mandhana’s fabulous knock:

The Goddess of the offside.
Congratulations on your maiden test hundred @mandhana_smriti. First of many. Well played 👏🏻 #AUSvIND pic.twitter.com/nS6am012nL

Well that is superb, Smriti Mandhana. I remember seeing her for the first time in the 2014 Test against England at Wormsley and being blown away by how good she looked. She now looks even better and has a Test century to her name. Bravo! #AUSvIND — Melinda Farrell (@melindafarrell) October 1, 2021

Smriti Mandhana is out after a brilliant innings. Scoring 127 (216). Well played. Gardner gets the wicket. #AUSvIND

Fantastic just fantastic from @mandhana_smriti pink ball 100 and one that will always be remembered with fondness. Setting up the game. Well played. @BCCIWomen — Boria Majumdar (@BoriaMajumdar) October 1, 2021

Woke up to Smriti Mandhana scoring a century.
Can’t think of a better morning alarm.
What tremendous knock.#AUSvIND

1st Indian woman to score a century in Australia 1st visitor (non-English) to score a 100 in Aus All in a #PinkBallTest where the closest to practice before the series was carrying a ball in her kit bag. If #SmritiMandhana isn’t the definition of swag, I do not know who is. pic.twitter.com/AqJtCu87ac — Lavanya L Narayanan (@lav_narayanan) October 1, 2021

The Queen in Queensland… Smriti Mandhana!

SO SO proud and just so happy to see the progress this @BCCIWomen team continues to rapidly make, being fearless and taking the 🌎 on!#AUSvIND #AUSWvINDW #AUSvsIND pic.twitter.com/Zpz9VXkXuh

Previous articleMCX Gold may trade in 45800-46800 range next week; selling pressure to continue in MCX silver at higher levels
Next articleApple to Bundle Free AirPods With iPhone 12 or iPhone 12 mini Purchase: All Details
RELATED ARTICLES
Sports