If No. 1 Iga Swiatek keeps improving, look out 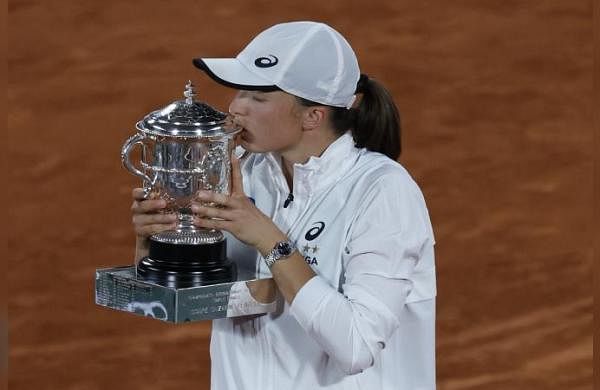 PARIS: Iga Swiatek’s first Grand Slam title came at the French Open in October 2020, when the coronavirus pandemic forced the tournament to shift from its usual May-June spot on the calendar and limited the number of spectators in Court Philippe Chatrier to 1,000.

She was just 19 at the time, ranked outside the top 50, in possession of zero tour-level titles before that triumph. And as Swiatek thinks back now to that moment in time, she describes the whole thing this way: “Lucky.”

Which is quite different from how Swiatek views — and should view — what she accomplished Saturday, not only by claiming her second major trophy, and second at Roland Garros, with a 6-1, 6-3 victory over American teenager Coco Gauff in the final before 15,000 fans, but by carrying the “baggage” of the No. 1 ranking and a winning streak that has now reached 35 matches.

“In 2020, the main thing that I felt was confusion, because I (had) never really believed 100% that I can actually win a Grand Slam,” she said. “This time it was pure work.”

Work to improve her game.

Work to stay focused and shut out the noise.

Work to handle the pressure of being the favorite every time out on the court.

“I try to lean on the strengths and the things that I have (that are) better, maybe,” said Swiatek, who turned 21 on Tuesday.

Then she added with a smile: “I’m also aware that my opponents are also going to be stressed. So I try to not panic and just be less stressed than they are.”

She and her team — which includes coach Tomasz Wiktorowski and sports psychologist Daria Abramowicz — have tried to do their best to not let everyone else’s concern with, and attention to, the unbeaten run that began in February distract and overwhelm Swiatek.

“To be honest, we do not count those victories. We live day by day. Just the next match is important for us,” Wiktorowski said. “And I know that every single tennis coach — and not only tennis coaches — (talk) like this. But this is just the best option. This is the best way, just to take everything step by step, one at a time. … And these kind of amazing things can happen.”

Swiatek has won the past six tournaments she’s entered. She is 44-3 this season. She has won 56 of her past 58 sets.

“She really didn’t give me anything,” Gauff said. “Every time I thought I hit a good ball, it wasn’t.”

Asked to describe what Swiatek does so well, Gauff boiled it down succinctly: “You have no time,” which is quite an appraisal after a match on red clay, the slowest of the sport’s surfaces.

Now the circuit moves to slicker grass, with Wimbledon starting on June 27.

Swiatek won the junior title there in 2018. In two appearances in the women’s event, she has lost in the first round in 2019 and reached the fourth round a year ago (the All England Club canceled the tournament in 2020 because of the pandemic).

“My coach believes I can win more matches on grass. I don’t know about that yet,” she said. “Honestly, grass is always tricky. I actually like the part that I have no expectations there. It’s something kind of refreshing.”

That was most definitely not the case in Paris.

But as both Swiatek and her coach said: Stay tuned.

“It’s just the beginning of this journey. We have much more to do,” Wiktorowski said. “And every single tournament just brings us new information. We want to keep an eye on (her) strengths, and we will try to develop other tools.”

Which other tools? There do not seem too many gaps in her repertoire, in terms of skills, strategy or state of mind.

“There is always something to improve, honestly. I’m still not, like, a complete player,” Swiatek said, mentioning her ability at the net as one area she can make stronger, before cutting herself short.

“Yeah, there are many things,” she continued. “I’m not going to tell you, because it may sound like I’m concerned about some stuff.”

Sure doesn’t seem as if there should be much cause for concern on Swiatek’s part. It’s her future opponents who should be worried.