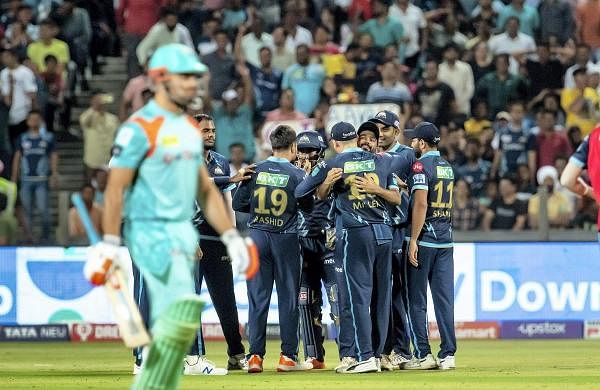 CHENNAI: The doubts have been there from the day the player auctions ended. How will Gujarat Titans mask their weak link? In a format where most teams consider batters to be the be all and end all, with no big auctions on the horizon, one of the two new teams in the IPL, Gujarat’s tactics at the auction was interesting.

Having signed Hardik Pandya, Rashid Khan and Shubman Gill before the auction, Gujarat showed interest in Shreyas Iyer after failing to get Pat Cummins and Kagiso Rabada. The first batter they bought at the auction was Jason Roy, who pulled out. They unsuccessfully pursued Washington Sundar, Mitchell Marsh, Ishan Kishan, Liam Livingstone before adding Matthew Wade and Wriddhiman Saha at the fag end after both went unsold.

As they confirmed their entry into play-offs, courtesy 62 run win against Lucknow Super Giants, it is safe to say Gujarat have successfully covered up their weak link. Gill hasn’t really set the stage on fire, but with 384 runs, he is leading the run charts for Gujarat. And with Pandya and David Miller doing their bit in the middle-order and Tewatia and Saha doing their roles to perfection, they have looked unstoppable.

Despite the wins, Gujarat know their top-order still remains shakey. Vijay Shankar, who he picked for the role at No 3, hasn’t made the impact. Sai Sudarshan has looked every bit impressive, but he is still at a stage of his career where he is progressing. Gujarat have even tried Pandya at No 3, but they know their captain is needed much more in the middle-order — specifically in at No 4.

On Tuesday against Lucknow, they tried Wade at one drop. For a team that has used only 14 players this season and appeared to have a set plan for each role, it is the No 3 role that they have adopted a merry-go-round formula. Vijay and Sudarshan have been tried out in the position in four matches, and Pandya has done so in three. But none have owned that position, which now is becoming a huge concern as the play-offs near. Right through the season, all their No 3s put together have contributed only 261 runs and although it isn’t the lowest in the IPL, Gujarat know it can bite them badly.

Especially if they lose their No 3 early in the innings, like it happened against Lucknow. It forced Pandya to steady their innings and once he was too perished looking to up the ante, it left Miller and Gill to first take them to a safe score on a two-paced pitch. With only Tewatia and Rashid Khan left to follow, the downside of having one of the strongest attack in the IPL is they have compromised on batting depth.

And just like it has been the case throughout, Gujarat, thanks to a handy unbeaten 63 from Gill, reached 144/4 at the MCA Stadium in Pune. On a surface where run-scoring was getting more and more difficult as the overs progressed, Gill and Tewatia combined for a big 41-run stand in four overs. And Gujarat’s attack led by Rashid Khan showed 144 was a big total on the surface. The leg-spinners four wickets and help from seamers meant Lucknow were bundled out for 82.