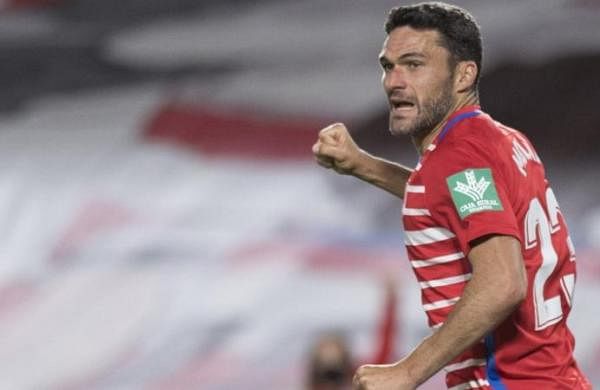 He knew it was a big miss. And it proved to be very costly.

Molina missed from the spot in the 72nd minute and Granada was relegated from the Spanish league on Sunday after a 0-0 draw at home against Espanyol, allowing Cádiz to take advantage and stay in the first division.

A win would have been enough for Granada regardless of other results, but the setback opened the door for Cádiz after it defeated Alavés 1-0 with a goal from Honduran Anthony “Choco” Lozano a few minutes after the missed penalty by Molina to stay in the top flight.

“It’s a tough blow for the locker room,” Granada coach Aitor Karanka said. “Specially when we were so close. To go down like this is unfair.”

Cádiz, Granada and Mallorca entered the last round fighting to avoid demotion, with Cádiz sitting inside the relegation zone before the matches started. Levante and Alavés had already been relegated.

Mallorca secured its place in the top tier after a 2-0 win at midtable Osasuna, with Angel Luis Rodriguez and Clément Grenier scoring second-half goals.

Mallorca and Cádiz ended with 39 points, one more than Granada.

“It wasn’t by much, but I’m happy with how things turned out for us today,” Cádiz coach Sergio González said.

The 40-year-old Molina was emotional after the match as players and coaches from both teams came to console him.

Granada finished seventh in the league in 2019-20 and was a quarterfinalist in the Europa League in 2020-21. It was the ninth in the Spanish league last season.

Cádiz, also based in southern Spain, will play in the top flight for a third consecutive season after 14 years in the lower divisions.

Cádiz’s fans were still celebrating Granada’s missed penalty when Lozano found the net from close range in the 76th for the goal that proved to be enough to stay up.

“We suffered a lot, it wasn’t easy,” Lozano said. “What we achieved is special.”

There was a late scare when the referee went to check a possible penalty kick for Alavés a few minutes from the end, but video review determined that the handball by a Cádiz defender was involuntary.

In a match with both teams safe from relegation, Elche beat Getafe 3-1 with Kike Pérez scoring twice for the hosts.

Real Madrid, which had already clinched a record-extending 35th league title, finished its league campaign with a 0-0 home draw against Real Betis on Friday in its final game before facing Liverpool in the Champions League final on Saturday in Paris.

Real Madrid ended 13 points in front of second-place Barcelona, ​​which finished its season with a 2-0 loss to Villarreal at the Camp Nou Stadium. Atlético Madrid ended in third place, two points behind the Catalan club, after a 2-1 win at sixth-place Real Sociedad. Fourth-place Sevilla was one point behind Atlético after defeating Athletic Bilbao 1-0 at home.

Madrid, Barcelona, ​​Atlético and Sevilla will play in the Champions League next season, while Betis and Sociedad will participate in the Europa League.

A spot in the Europa Conference League was still available ahead of Sunday’s games and Villarreal secured its place next season with the win over Barcelona to finish in seventh position, four points ahead of eighth-place Bilbao.