From cramped room to dream house, hockey forward Pawan Rajbhar wishes all luxuries for his family 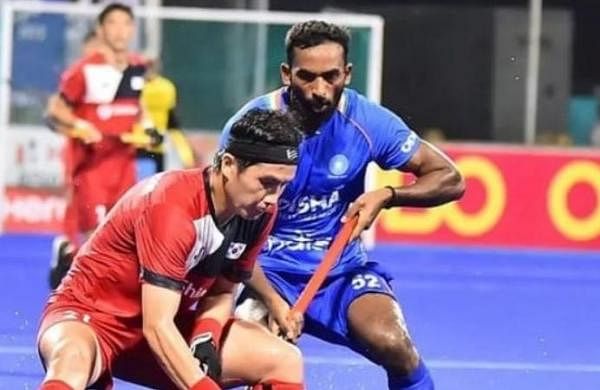 CHENNAI: Ahead of the Asia Cup in Jakarta, Indonesia, Pawan Rajbhar visited his village Bhadaila in Ghazipur district of Uttar Pradesh. The sole objective of the short visit prior to his maiden international hockey tournament was to check the progress of the construction of his house, Pawan’s childhood dream.

A lot has changed since that visit more than a fortnight ago as Pawan has not only made his India debut but also played a key role in helping the team clinch bronze. India fielded a young and inexperienced side for the tournament and 24-year-old Pawan emerged as the biggest find for the country.

In the seven matches, the forward scored three field goals apart from converting one penalty corner. He was also adjudged player of the match in India’s game against the hosts wherein the team pumped in 16 goals to qualify for the Super 4s.

A product of Meghbaran Singh Hockey Academy, Karampur, Pawan knows nothing else apart from hockey since he wielded the stick more than a decade ago.

“We don’t have a choice as hockey is the only sport here we can pursue. More importantly, it’s the way out of poverty for all of us. It was the same for Pawan bhaiyya and me,” Gagan, Pawan’s younger brother who trains at SAI Regional Center in Bhopal, told this daily.

Sons of a labourer, both started visiting the academy situated less than a kilometer from their village along with senior players. While many of those left the sport in due course of time, the Rajbhar brothers’ passion for the game continued unabatedly.

“Bhaiyya played in KD Singh ‘Babu’ U-14 Tournament and was selected for the academy. In 2012, he moved to SAI Bhopal and stayed there till 2016 when he got a job with the Indian Navy. It changed everything for good. My father Jalandhar Singh died in a road accident in 2016. Bhaiyya has been the sole earning member of our family ever since. We are four siblings (two brothers and as many sisters) and spent our childhood in one room we got from our grandfather. things are going good for us now, bhaiyya wants to shift to the new house. good life,” said the 19-year-old Gagan.

Apart from Pawan, midfielder Raj Kumar Pal and forward Uttam Singh from the Academy also played in the Asia Cup. Indradeo, the longtime coach of the academy, believes the center has been providing an excellent opportunity to youngsters from Karampur and other adjacent villages to make it big in the field of sport.

“The first goal for these kids is to secure a government job. Pawan was no different. He started as a fullback here and was very swift with the ball since the beginning. His dodging skills are exceptional. As he grew taller, he only got better,” said Indradeo, who has been coaching youngsters at the facility for more than two decades now.

The trio is scheduled to reach Varanasi on Friday. Preparations are being made to give them a grand welcome. It will definitely be a surreal experience for these players. Pawan, however, will be more eager to reach his village and ensure his dream project gets completed as soon as possible so that his family, especially his mother, can enjoy the privileges of a big house after spending a major part of her life in that cramped one-room structure.

Share
Facebook
Twitter
Pinterest
WhatsApp
Html code here! Replace this with any non empty raw html code and that's it.
Previous articleWeather News Update: Monsoon enters the northeast through the Bay of Bengal, know in which states the rain alert and where the heat wave will run
Next articleHimachal CM opens Kangra Valley festival
AUTO
Auto