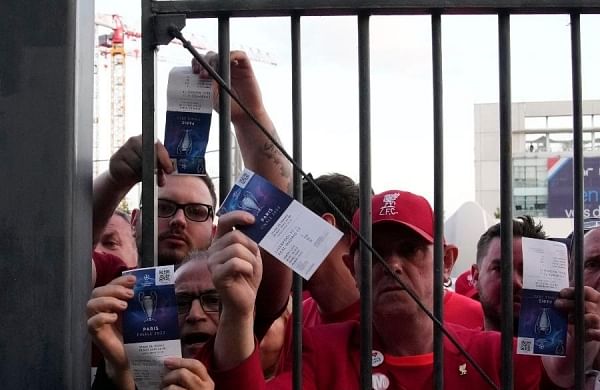 PARIS: France’s interior minister admitted that mistakes were made in dealing with the crowd outside the Champions League final in Paris but justified the use of tear gas, saying the move was crucial to prevent supporters from getting killed.

Gerald Darmanin was grilled by a senate commission and asked to provide explanations for the organizational fiasco outside the Stade de France in the Paris suburb of Saint-Denis, where Real Madrid beat Liverpool 1-0 on Saturday.

He maintained that the presence of 30,000 to 40,000 supporters without tickets or with forged tickets led to the incidents that marred the event, despite being challenged by a lawmaker who said he did not bring the proof to back up those numbers.

Darmanin threw his full support behind the police and security officers who were in charge of policing the event.

He said that dispersing the crowd that had amassed near the stadium’s fences was the only way to prevent people from getting crushed. “In order to push back a crowd that was about to be crushed, the policemen and the gendarmes, probably in a hurry and under the order of their hierarchy, used dispersion means,” Darmanin said.

However, he said there were two instances where the use of tear gas was disproportionate —without giving details — and promised that sanctions will be taken against two individuals.

“The negative impact of this game is a scar to our national pride and it is obvious that things should have been better organized,” he said. “Did we avoid the worst? Yes. Could we have anticipated more? No doubt about it.”

In the wake of the, Liverpool fans’ leadership groups about heavy-handed policing and poor organization on a troubling night that saw children and elderly people among those getting sprayed by tear gas.

Earlier Wednesday, French President Emmanuel Macron and government members said they were “sad and sorry” for the 2,700 Liverpool fans who had a ticket but couldn’t get into the stadium.

“Could we have done things better or could it have been better handled? Yes,” said French government spokesperson Olivia Grégoire said. “Can we improve things, especially in view of future sports events? Certainly.”

Saturday’s events prompted concerns in France and abroad about the country’s ability to host major sporting events. France will host the Rugby World Cup next year and the 2024 Olympics.

Sports minister Amelie Oudéa-Castéra also attended the senate hearing and pointed out areas of improvement for the future, including better management of crowd flows and more systematic use of electronic ticketing.

Repeated and brutality have been made against French police in recent years, notably during the Yellow Vests protests against the government, amid calls for police to exercise greater restraint. French police have also struggled to get a grip on fan violence at domestic soccer matches this season.

Liverpool said it has already collected more than 5,000 testimonies from supporters who traveled to France to attend the final.

Liverpool chief executive Billy Hogan has reviewed some of the information and said he was “horrified by the way some men, women, children— able-bodied, less able-bodied — have been indiscriminately treated,” both before and after the match.

According to the French Football Federation (FFF), 35,000 people without tickets or with “fake” tickets made their way to the Stade de France. It said they created disorder by blocking access to the stadium and preventing fans who had real tickets from getting into the venue. Darmanin cited the example of a ticket that was reproduced 760 times.

European soccer’s governing body, UEFA, has also started to gather evidence about issues outside the Stade de France that marred one of the world’s biggest games in sports.

Grégoire expressed sympathy for 2,700 Liverpool fans, “fathers, mothers with their children disgusted they couldn’t attend a sports event they were waiting for. The President of the Republic and all the government were sad and sorry for these people.”

Hogan also drew attention to what happened after the match. “I do think it’s important to recognize we’ve all been rightly focused on the access issues at Stade de France,” he said.

“I think it’s also important we don’t lose sight of what happened after the match. I think we’ve all seen videos and photos, and I’ve read a number of stories of (fans’) absolutely horrific experiences leaving the stadium as well – crimes being committed, and muggings taking place.”

According to Darmanin, the violence was made possible because the police officers initially deployed in the area between the stadium and the train station had been moved closer to the stadium’s gates to help disperse fans, leaving that zone without surveillance.

He said that 29 people were arrested around the stadium, including 14 Britons, with 52 other people apprehended within 200 meters of the stadium. Darmanin added that Spanish and British citizens will be able to file legal complaints in their own countries.