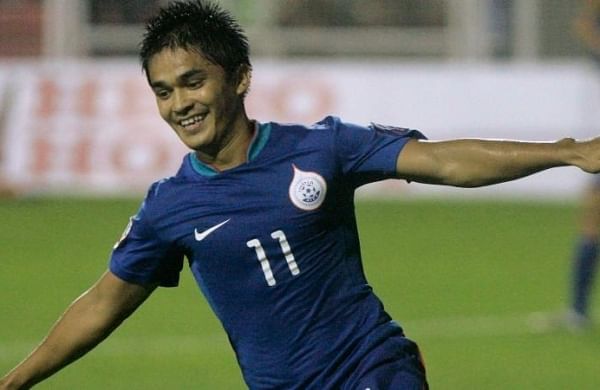 NEW DELHI: Indian football team captain Sunil Chhetri has truly gone global with FIFA shooting a “special series” on him in appreciation of a stellar career for a country for whom a World Cup participation remains a pipedream after years of bombast.

Turning out for a country that is yet to play in the World Cup, Chhetri featuring in a series by the world football governing body is unprecedented by any stretch of imagination.

“Some of the parts have been shot in Bangalore as he is living there while a bit of shooting also took place in Delhi, where his parents live and where he grew up,” a source aware of the development told PTI on Friday.

“It’s part of a FIFA’s regional content initiative which they have launched. So globally when one talks of Indian football, Sunil, without a doubt, is the contact point. You would go to him, right,” an Indian football insider added.

By scoring India’s second goal in their final AFC Asian Cup Qualifying game against Afghanistan on Tuesday, Chhetri drew level with Puskas while becoming the fifth-highest international goal scorer of all time.

The 37-year-old Chhetri is the third-highest goal scorer in international football among active players, a list that is led by Portuguese star Cristiano Ronaldo.

Ronaldo has so far scored 117 goals for the national team.

In an illustrious career, Chhetri has represented the Indian team in 129 games so far.

When asked about his record after India’s qualification to the Asian Cup, the Indian captain had stated, “I genuinely don’t care about records and personal milestones. I just want to enjoy myself as I move on to the last moments – just go out and enjoy on the pitch.”

While this is the first time that India has qualified for back-to-back editions of the top continental tournament, the team has struggled to get its act right in recent years, yet again failing to progress in the 2022 FIFA World Cup Qualifiers.

The team though made amends for the disappointment in the World Cup Qualifiers by entering the Asian Cup with Chhetri leading from the front with four goals.

Impressed by the huge turnout at the Salt Lake Stadium in Kolkata, Chhetri says the side would love to play the AFC Asian Cup on home soil while confessing to “hitting my peak” at a time when many are discussing his retirement from the game.

“The kind of form we are in, we would have loved to play at home. The way the fans are coming up and supporting us in numbers, it would be great to play here,” said Chhetri.

Share
Facebook
Twitter
Pinterest
WhatsApp
Html code here! Replace this with any non empty raw html code and that's it.
Previous articleRenault Car Discounts: Big discount on Renault cars, you can save Rs 94 thousand – News
Next articleEsha Gupta does not want to get married, giving this advice in this viral video
AUTO
Auto