Deliveries of the first batch of new Honda City e:HEV begin, know what is the price and features – News 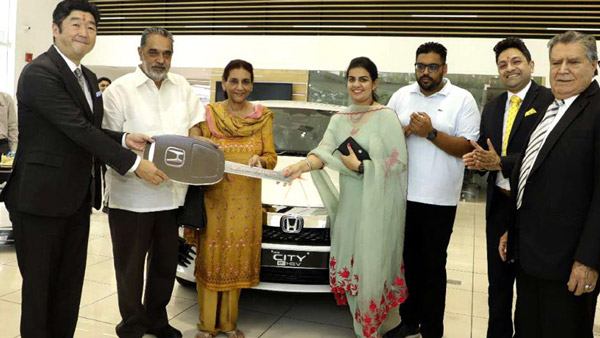 Now information is coming out that the company has started the delivery of the first batch of the new Honda City e:HEV. Honda Cars India’s top management, which includes their President and CEO, has been the first to hand over the keys to the customers. The new City hybrid is based on the fifth-gen City, which is already on sale in the country.

In the hybrid engine, the Honda City e:HEV is equipped with many new and advanced safety features, as well as it is also better than its standard model in terms of performance. The engine of the new Honda City Hybrid is very special. This is a hybrid engine that uses Honda’s e-CVT hybrid system.

Electric motors are fitted to the front wheels of the car which are mated to a single fixed ratio gearbox. The Honda City e:HEV is offered with different driving modes – Electric Drive, Hybrid Drive and Engine Drive. The car also has a regenerative braking system that charges the battery when the brakes are applied.

Depending on the speed of the car, the hybrid system works automatically. Honda claims that the City Hybrid can deliver a mileage of 26.5 kms on 1 liter of petrol, which is ARAI certified. The car has a fuel tank of 40 liters, which means that in hybrid mode, it can give a mileage of 1,000 km on full tank fuel.

This figure is the highest for any other car in its category. Honda’s new City hybrid sedan is also equipped with many advanced safety features. Various safety features have been included in it including Adaptive Cruise Control, Lane Departure Warning, Lane Keep Assist, Auto High Beam Assist, Emergency Braking.

Apart from this, Advanced Driving Assistance System (ADAS) has also been given in it. This system supports pedestrian warning, lane assist, automatic emergency braking. Apart from this, it has been given 6 airbags for the safety of the passengers and ISOFIX Child Passenger Mount for child safety.