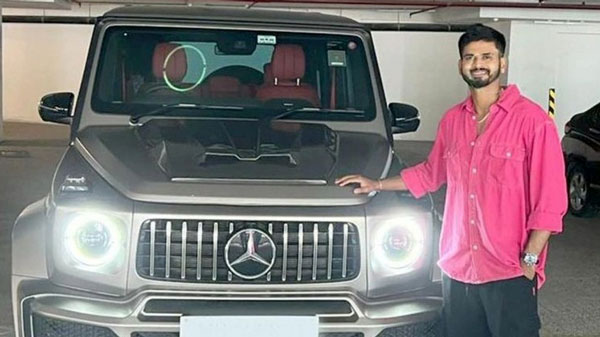 The list of luxury cars of Shreyas includes not only Mercedes-AMG G63 but many more luxury cars. He also owns super cars like Lamborghini Huracan Audi RS5. Talking about the Mercedes-AMG G63, it is the most luxurious car in his garage.

The car is powered by a 4.0-litre V8 turbo engine that can generate maximum power of 585 Bhp and peak torque of 850 Newton meters. The car is mated to a nine-speed automatic gearbox with all-wheel drive function. The massive 22-inch alloy wheels fitted in it make it a very attractive SUV.

Thanks to its powerful engine, the AMG G63 can accelerate from 0-100 km/h in just 4.5 seconds. At the same time, its top speed is 240 kilometers per hour. The Mercedes-AMG G63 is a multiple-terrain SUV that can be driven on any type of road. Along with the normal road, it is able to move smoothly even on rocks and rocky roads. It is very much liked by off-roading ride enthusiasts all over the world.

The AMG G63 has been given an attractive boxy design. In front, a large horizontal slot chrome grille, Mercedes brand logo and LED lights have been given. Talking about the interiors, it is a 5-seater SUV. The cabin gets a 12.3-inch touchscreen display, dual tone contrast and soft-touch leather seats.

Recently Mercedes-AMG has revealed the “Vision AMG” concept electric car. The entire design of this car is similar to the Mercedes EQXX concept that the company introduced last year. The company hasn’t revealed the range and features of the Vision AMG, but according to the report, the Mercedes-AMG electric sports car is confirmed to launch in 2025.

Mercedes-Benz is soon going to launch its new electric sedan in India. The company has revealed that it will launch the EQS (Mercedes-Benz EQS) in India this year. According to media reports, the company will produce this new electric car at the Chakan plant in Pune. However, it will be brought to India as a knocked down unit (CKD) and will be assembled locally. The EQS will be the company’s second electric car in India and is expected to go on sale in the last quarter of this year.

Share
Facebook
Twitter
Pinterest
WhatsApp
Html code here! Replace this with any non empty raw html code and that's it.
Previous articleMental Health Must Be A Priority For Action On Climate Change: WHO | Science & Tech
Next articleWagon-R top selling hatchbacks of May 2022, Maruti Ignis also included in this list – News
AUTO
Auto