HomeTech and GadgetsBounce and Hindustan Petroleum join hands to set up 3,000 battery swapping... 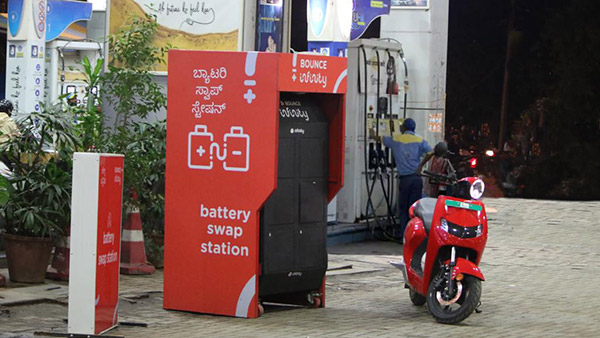 Those choosing this subscription model are free to use any of Bounce’s battery swapping stations nationwide. To make this swapping solution more viable, the company has now tied up with Bharat Petroleum (BP).

Going by these figures, each major city is going to get around 300 battery swapping stations, which is good enough for people using electric vehicles and can be considered as a viable solution. Bounce’s swapping stations have four, six or nine slots.

In all these slots, the batteries of electric two wheelers are assembled and charged. A customer just needs to remove the fully charged battery and reinsert his drained battery and plug it in to charge.

Bounce says that its network will have both manned and unmanned swapping stations, and in the case of unmanned stations, the entire process will be conducted through the company’s app.

Bounce also says that these swapping stations will support their interoperable partners (any other vehicle that uses the same battery), which means two-wheelers and three-wheelers from other manufacturers will also be able to use these stations .

This scooter can be driven at a top speed of 65 kms. The company has launched it in five colors which include Sporty Red, Pearl White, Sparkle Black, Comet Gray and Desert Silver.