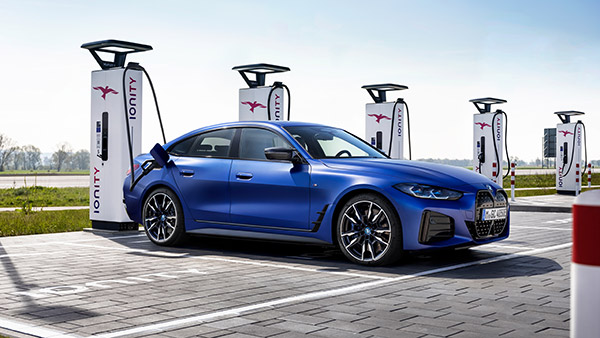 Available in one trim

The BMW i4 is being imported into India in India as a completely built unit. It is made available in India in the eDrive40 Sport trim. This electric sedan will come in Mineral White, Black Sapphire and Skyscraper Gray metallic paint options.

The car comes with a two-year unlimited kilometer warranty. At the same time, a warranty of eight years or up to 1,60,000 km is being given on the battery. There is also an option to extend the warranty of the car by five years. BMW claims that the i4 is the most aerodynamic electric vehicle in its class.

The BMW i4 is equipped with the fifth generation eDrive technology. The single speed electric motor in this car generates 340 bhp power and 430 newton meter torque. BMW claims that the i4 can deliver a proven range of 590 kms on a single charge.

The BMW i4 can be charged using the Level-2 Wallbox via an 11kW AC charger. The car’s lithium-ion battery can be charged up to 100 percent in 8 hours. It can be charged with 200 kW (kW) DC fast charge to run up to 142 kilometers in just 10 minutes.

The design of the BMW i4 Electric is based on the new generation BMW 4 Series. However, due to the electric variant, some new updates can be seen in the design. It gets a large kidney grille, LED headlamps, optional blue accents and the signature coupe roofline. The car’s cabin has a 12.3-inch information display and a 14.9-inch control screen. The car’s infotainment system is based on iDrive 8 software and supports over-the-air (OTA) updates as well.