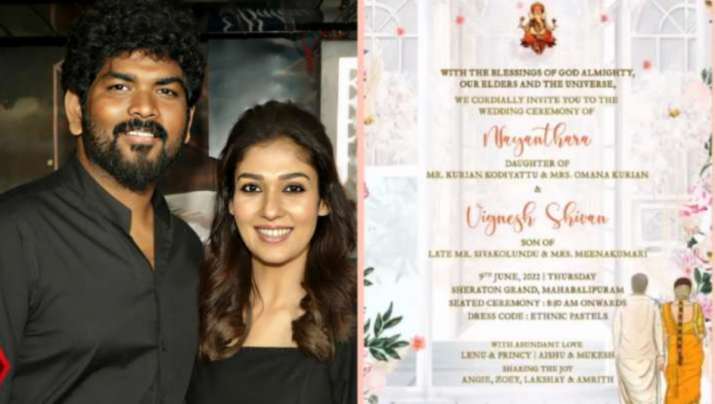 Nayantara-Vignesh Shivan weddingLovebirds Nayanthara and Vignesh Shivan are finally tying the knot on 9th June and fans are very excited. The actress, popularly known as the Lady Superstar of Tamil and Telugu film industry, is in a relationship with her filmmaker boyfriend for more than 6 years. Both of them have finally decided to make their relationship official on 9th June. They will get married on the auspicious occasion of Ganga Dussehra at Sheraton Grand in Mahabalipuram. Vignesh revealed during a press conference that their wedding was to take place in Tirupati but the venue was changed due to logistics issues. A day before the wedding, the wedding cards of lovebirds are going viral on social media.

It looks like there are two invitations – one printed and one digital. While the digital cards were aesthetic and filled with flowers and palace vibes, the printed invitation, on the other hand, was traditional and featured images of the bride and groom. It has background music by Naanum Rowdy Paddy, which marks the 2015 debut of Nayanthara and Vignesh. It was reportedly distributed to his close friends and family members.

During the press conference, the director said, “Just like your blessings have been there for me professionally, I needed it for my personal life as well. I am moving on to the next phase of my personal life. On 9th June I Going to marry the love of my life Nayanthara. It is going to be an intimate event in Mahabalipuram with family and close friends. Initially, we planned to get married at Tirupati temple, but not due to logistics issues We will share our pictures with all of you in the afternoon after the wedding. On the afternoon of June 11, Nayanthara and I will meet all of you (media) and we will have lunch together.”

According to reports, it is being said that stars like Vijay Sethupathi, Samantha Ruth Prabhu, Rajinikanth, Kamal Haasan, Chiranjeevi, Suriya, Ajith, Karthi may be involved in this marriage.