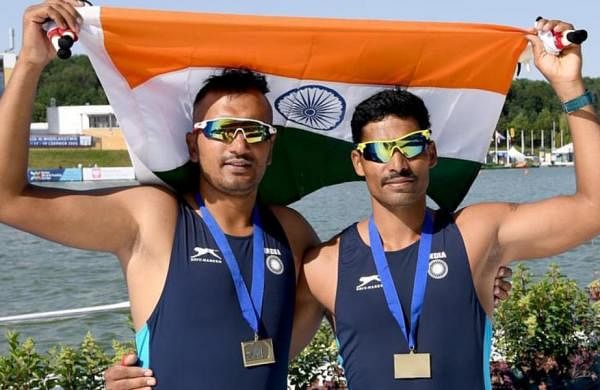 CHENNAI: Both of them lost their left foot to a landmine during counter-insurgency operations in Nowshera, Jammu. It meant they had to change their respective sports. Narayana K was a canoeist while Kuldeep Singh used to play volleyball before the injuries were sustained.

Both switched to rowing on the advice of Colonel Gaurav Dutta, chairman of the Para-Rowing Commission, Rowing Federation of India (RFI). Since the switch, the army duo has never looked back.

They started with a bronze at the PR3 M2- (men’s coxless pair) at the World Rowing Cup 2 in Poznan, Poland in 2019. They followed it up with another bronze at the Asian Rowing Championships in Chungju, South Korea in the same year in PR3 Mixed4+ with Jyoti and Kritika.

Narayana and Kuldeep returned to Poznan to compete in the 2022 edition of the World Cup and they made sure that they finished on the podium. The duo finished third behind rowers from France and Ukraine in PR3 M2- with the timing of 7:33.35.

“In 2017, the Army had established a dedicated para node at Bombay Engineering Group in Pune. Rowing was one of the four disciplines introduced initially and Narayana and Kuldeep started their partnership there only. They suffered injuries during counter-insurgency operations in Jammu. Given their height and weight, which matter a lot in rowing, I advised them to take up rowing,” Dutta told The New Indian Express from the competition venue.

It is open to both male and female rowers with a disability who meet the criteria set out in the ‘Para-rowing Classification Regulations and Bye-Laws’. Para-rowing was formerly called adaptive rowing and was first raced at the 2002 World Rowing Championships in Seville.

“I was with the 54th RR Battalion and posted in Nowshera, Jammu in 2015. It was then during an ambush that I lost my left foot after I accidentally placed it on a landmine,” said 33-year-old Narayana who hails from Andhra region.

Kuldeep, who is with Jat Regiment, met the same fate a couple of years earlier in the same region. “While patrolling in 2013, my left foot was blown away because of a landmine. Dutta sir asked me to take up rowing,” said Kuldeep (30), who is from Haryana.

The duo now wants to win medals for the country in the upcoming Asian Championships. Their other targets include Para Asian Games and World Championships. “Our eventual aim is to qualify for 2024 Paralympics. Before that, there are other important events lined up and we hope to change color of the medals in the upcoming events,” added Kuldeep.

Besides, the Indian Men’s Eight (M8+) and Women’s Eight (W8+) also entered Finals A and finished fifth in their respective races.