HomeAutoAn FIR was lodged when the car was driven on the coast...

An FIR was lodged when the car was driven on the coast of Goa, the police confiscated the car – News 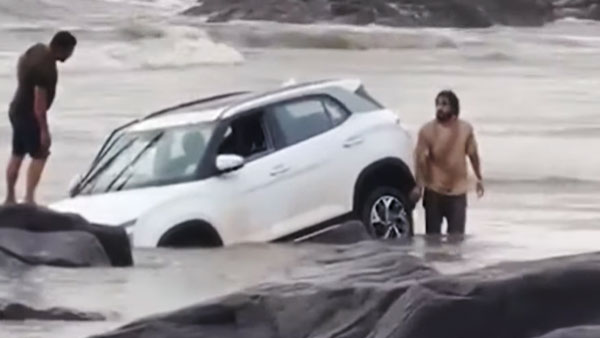 Recently a fresh case has come to light, in which the police have arrested a tourist for driving on the beach in Goa and seized the car. Several videos of this incident have gone viral on the internet. In this video, a group of tourists can be seen driving the new Hyundai Creta on a Goa beach in stormy weather.

After some time, this Hyundai Creta gets stuck as the occupants try to take it deeper into the water. But it is not known whether the officials were successful in rescuing the vehicle stuck on the beach or not, but police officials have arrested those tourists.

Deputy Superintendent of Police Jeevba Dalvi said that the accused has been identified as Lalit Kumar Dayal. He was driving a Goa registered Hyundai Creta. Those tourists seem to have hired vehicles from local vendors. The driver of the car, Lalit Kumar, has been arrested by the police.

He told that the police have also confiscated the Hyundai Creta. The police have registered an FIR under sections 279 and 336 of the Indian Penal Code. Apart from this, the police has also lodged a report against Mapusa’s car owner Sangeeta Gavdalkar in the RTO.

Tourists have already been arrested

Several tourists have been arrested by the Goa Police in the past for similar crimes. Let us inform that the Pernem Police of Goa arrested a tourist from Chennai for driving a Maruti Suzuki Swift on rent at Morjim beach.

Not only this, there have been many such cases where the vehicles of ministers got stuck on the beaches. It takes a massive effort to remove such vehicles from the beaches, as even the rescue vehicle has to face challenges in the sand.