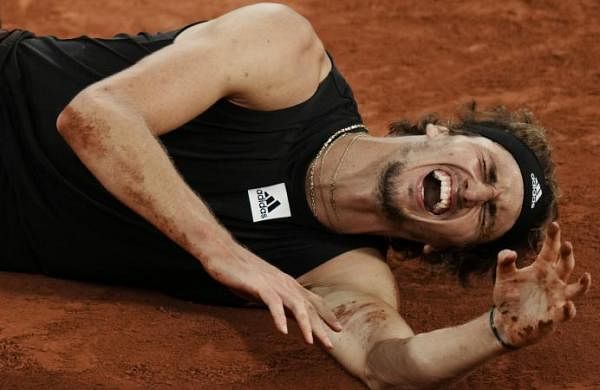 The 25-year-old German was more than three hours into an epic semi-final with Rafael Nadal when he badly rolled his ankle while moving to his right.

The World No. 3 crashed to the ground and was taken off the court in a wheelchair before returning several minutes later to shake the hand of the chair umpire and hug Nadal.

“I am now on my way back home,” the World No. 3 wrote on Instagram. “Based on the first medical checks, it looks like I have torn several lateral ligaments in my right foot.”

“I will be flying to Germany to determine the best and quickest way for me to recover. I want to thank everyone all over the world for the kind messages that I have received since yesterday.”

Zverev and Nadal had enthralled fans on Court Philippe Chatrier for three hours and 13 minutes before Zverev’s injury brought the match to a jarring conclusion on the eve of the second-set tie-break. Nadal had rallied from 2/6 in the first set tie-break to hold a 7-6(8), 6-6 lead at the time.

Sunday’s men’s singles final at Roland Garros will have a familiar feel, with Rafael Nadal going for a record 14th title, and a fresh feel with Casper Ruud in a Grand Slam final for the first time in his career.

Thirteen years and 21 Grand Slam titles separate these two, but when it comes to the final on Sunday, it will, as always, come down to who handles the occasion the best; who is able to bring their A-game when it’s needed most.