HomeTech and GadgetsAirplane speed will travel in India! Work started on the country's first... 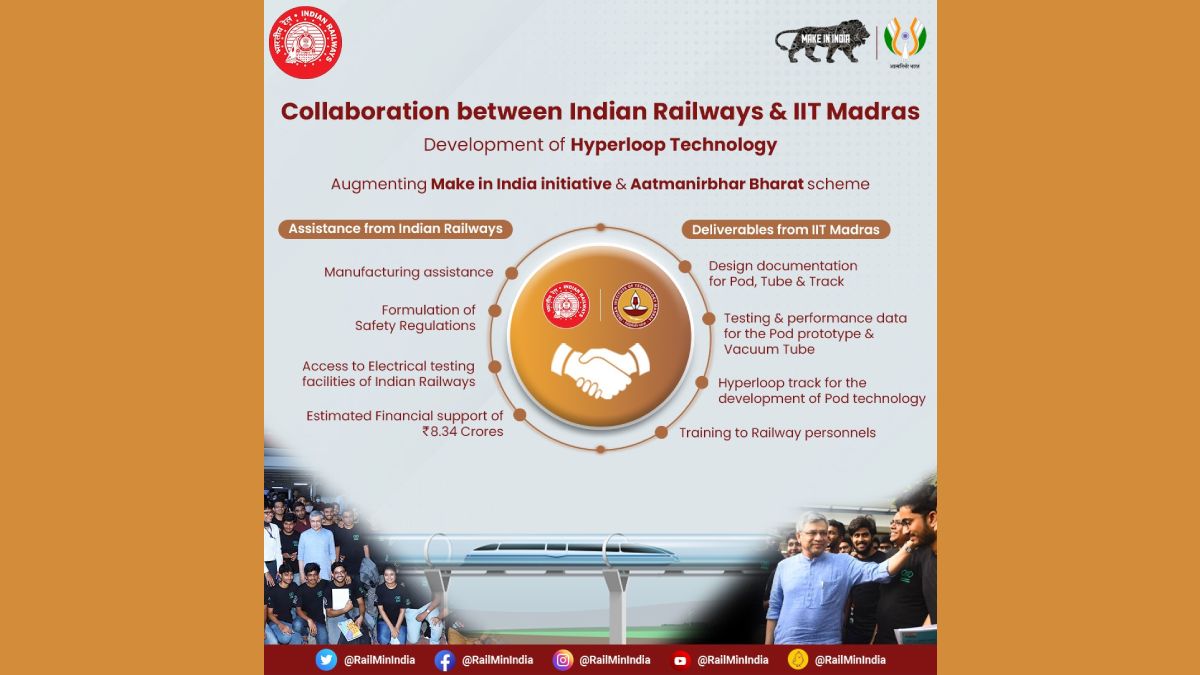 Ministry of Railways will collaborate with IIT Madras for development of ‘Indigenous’ hyperloop system. Along with this, help will also be given in setting up the Center of Excellence for Hyperloop Technologies at IITs. Giving this information, the officials said that in the year 2017, the then Railway Minister Suresh Prabhu had shown interest in Hyperloop technology. After this, several rounds of talks were held between India and an American company, but not much progress could be made in this. Now there is a plan to develop this technology with IIT Madras.

what is hyperloop system

Hyperloop works on a technology that uses magnetic levitation in tubes of low pressure to move people at the speed of an airplane. In a statement, the ministry has said that this technology can play an important role in making India carbon neutral. Ministry of Railways was looking for partners and domain experts to collaborate on the development of this emerging concept.

Get to know the ‘Invention Hyperloop’ team

To usher into a new era of transportation, Indian Railways has come together with @iitmadras to develop a hyperloop technology based transportation system.
Indian Railways will extend financial support of Rs. 8.34 cr to IIT Madras for this project. pic.twitter.com/xUoMyxj9QU

The Ministry of Railways was aware that in the year 2017, a team of 70 students named ‘Avishkar Hyperloop’ of IIT Madras is working on this. Railways has said that it will collaborate with IIT Madras for the development of an indigenous hyperloop system and will set up a Center of Excellence for Hyperloop Technologies there.

This group of IIT students made it to the top-10 in SpaceX’s Hyperloop Pod competition in the year 2019. It was the only Asian team to do so. The ‘Innovation Hyperloop’ team also won the ‘Most Scalable Design Award’ at the European Hyperloop Week – 2021.

8.34 crores is the cost of the project

IIT Madras approached the Ministry of Railways in March this year to work together on the development of contactless pod prototypes. The Hyperloop Test Facility at IIT Campus will offer the world’s largest Hyperloop Vacuum Tube. It can be used by Indian Railways as a test bed for further research on Hyperloop. The estimated cost of this project is Rs.8.34 crore. The institute also proposes to set up a Center of Excellence for Hyperloop Technologies at IIT Madras through the existing CRR (Centre of Railway Research).

The Hyperloop concept has been promoted by Elon Musk and SpaceX and has encouraged other companies to develop the technology. The company named Virgin Hyperloop did its first human trial in Las Vegas in November 2020. In this he achieved a top speed of 172 km / h.